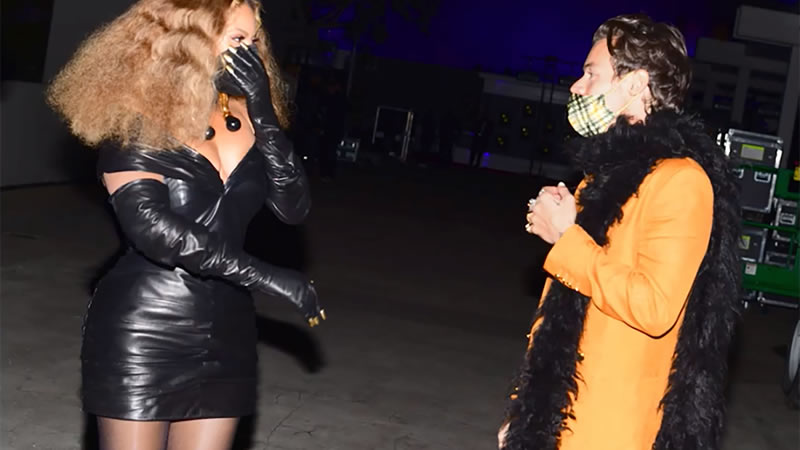 OK remain calm, but Beyoncé and Harry Styles are friends? They had an exchange at the 63rd annual Grammys that somehow slipped through the cracks, but Queen Bey is sharing the moment with us now.

On Wednesday, the “Drunk In Love” singer posted a Grammy montage video to commemorate her special, history-making night on Sunday, when she became the most Grammy-decorated female artist and singer, male or female, in history.

And if you blink, you might miss the Harry Styles-sized easter egg in the video set to her now Grammy-winning song “Black Parade,” but Beyoncé squeezed in a photo of the two talking somewhere outside on the set of the Grammys. And while we can’t technically tell that they’re smiling, (you know, because of the masks and all) they’re both definitely smiling with their eyes.

And let’s just say Twitter is very happy to find out that these two are friendly.

It was also a big night for Styles, who took home his first Grammy ever for Best Pop Solo Performance for “Watermelon Sugar.” He also chatted up ex-Taylor Swift in their first public conversation since they split in 2013, and shared an adorable hug with Billie Eilish. We’re loving all these celeb moments — the 2021 Grammys are the gift that keeps on giving.

Kim Kardashian in hot waters over “Asian are humans” remarks