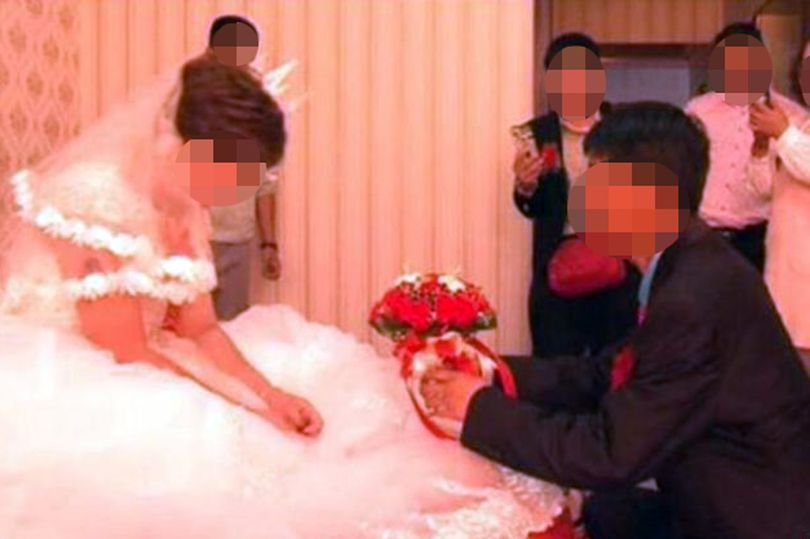 A horrified husband discovered his beloved wife had recently married another man after stumbling across their wedding video on social media.

The devastated 35-year-old, known only as Yin Cheng, from Beyannur, Inner Mongolia, was left speechless after spotting his partner, Nana, tying the knot with a man from a neighbouring town on video-sharing app Kuaishou.

The seemingly happy couple, who met through a matchmaker called Li, had only been married for two months when the video first surfaced.

When they first met, Li told Cheng that Nana, who had been married previously, could only get hitched via the non-binding tradition route rather than an official ceremony because her family would lose money on a construction contract.

Cheng had become suspicious of foul play when his new bride repeatedly left to visit her mum within days of exchanging vows.

But he couldn’t believe his eyes when he saw Nana getting hitched to another man two months after they had became husband and wife.

Having tracked down Nan’s other husband in Xixiaozhao, he discovered he had been the victim of an elaborate scam to con desperate men and their families out of wedding gifts.

As part of the plot, the fraudsters were able to repeatedly remarry because they were not officially married. After contacting police, officers arrested five people alleged to have had been involved in 19 fake marriages, worth about 2million yuan (£221,461).

Marriage scams have also happened in the UK this year.

Last month, wedding planner Dana Twidale, 44, from Hull, East Yorkshire, pleaded guilty of of 26 counts of fraud after swindling ex-husband Carl out of more than £10,000 – and several brides and grooms out of cash before their big day.

Dana vanished with their hard-earned cash, but after a missing persons investigation was launched, she was later arrested after being pictured sunning herself in Benidorm, YorkshireLive reported at the time.

She will be sentenced at Hull Crown Court on June 7.

How ‘Deconditioning’ In Lockdown Affected Your Body