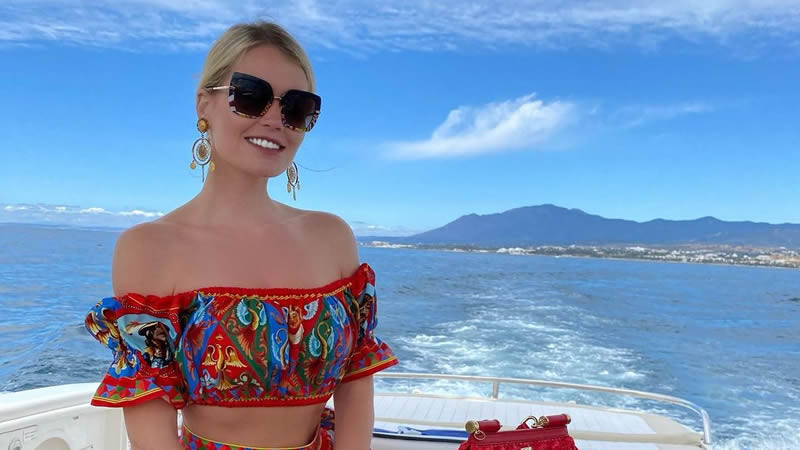 Lady Kitty Spencer, 30, has shared some gorgeous pictures on the internet of her vacation in Italy. Here’s what we know about Kitty’s vacation after her wedding to Michael Lewis this summer.

Following her marriage, last month to Michael Lewis, 62, Lady Kitty Spencer, niece of the late Princess Diana, has been enjoying what appears to be a very sunny and cheerful holiday in Positano, Italy. In recent weeks, Kitty has shared several photos from her vacation on Instagram.

This week, Kitty shared a stunning photo of herself standing in front of a bright blue ocean and captioned: “Postcards from Positano”.

On her summer vacation, it appears that newlywed Kitty has also been joined by friends.

A photo showed Kitty’s friend Natasha Poonawalla and Kitty relaxing on a boat on the sea of the Amalfi Coast.

In another photograph, Kitty and twin sisters Lady Eliza Spencer and Lady Amelia Spencer appeared overlooking a balcony in Rome.

Kitty captioned the post: “Best friends. Bridesmaids. Sisters,” along with plenty of love heart emojis.
Lady Kitty Spencer is the eldest child of Earl Spencer and Victoria Lockwood. In a star-studded wedding on July 24 in Italy, Kitty married fashion tycoon Michael Lewis this year. Michael Lewis is the chairman of the Foschini Group, a fashion company that boasts an impressive number of brands in countries across the globe.

Kitty’s wedding was widely awaited when she announced her engagement in January 2020.

The joyful couple married at the 17th-century home Villa Aldobrandini in Frascati, Rome.

Kitty and Michael’s wedding was reportedly a three-day event, with the couple then heading to the Amalfi Coast for their honeymoon.

Kitty donned an Italian fashion house’s Dolce & Gabbana lace gown with puffed sleeves for her wedding day. Kitty is a global ambassador for the luxury designer brand. Dolce & Gabbana designed a series of stunning handmade dresses for the wedding event.

On her wedding day, Kitty was walked down the aisle by her brother Louis Spencer, Viscount Althorp, and her half-brother Samuel Aitken.

Kourtney Kardashian Flies To Italy With Travis Barker For Vacation