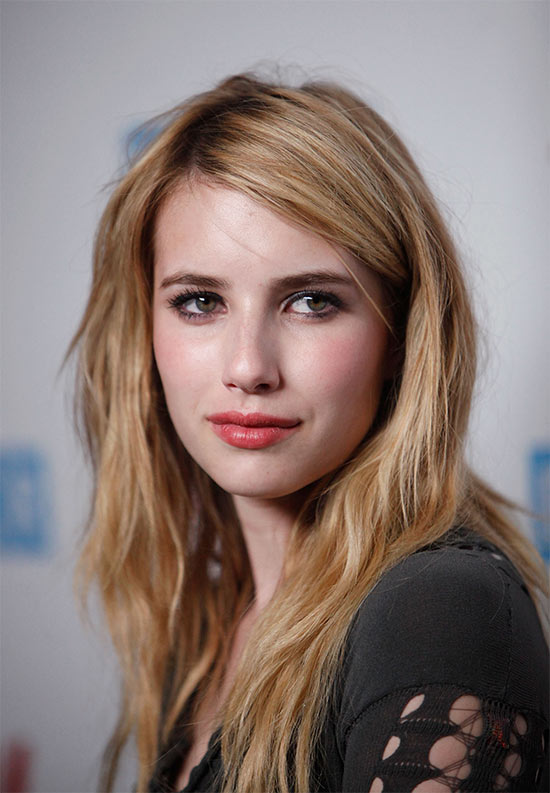 The Valentine’s Day star has become known for her roles in producer Ryan Murphy’s TV series American Horror Story and Scream Queens, while she also featured in 2011’s Scream 4. Her new movie, The Blackcoat’s Daughter, is another thriller, and Emma was chilled to the core just reading the script. “This movie is definitely actually terrifying, whereas Scream Queens is more fun scary,” she told U.S. breakfast show Today. “This is definitely a psychological thriller. When I read the script I knew I had to do the movie because it literally kept me up that night and I kept getting really scared, more so after I read it, like, a few hours later.

It stuck with me, which is how you know it’s really gonna be scary.” Despite feeling drawn to the project, Emma admits she is “not particularly” a horror fan, because she jumps at the slightest thing. “I get so scared so easily, so it’s kinda funny that I’m always involved in scary stuff,” she smiled. “It’s never scary when you’re making anything scary, like, I was never scared on Scream Queens, or American Horror Story, or The Blackcoat’s Daughter, but then watching it, you get scared,” she explained. “My friends make fun of me, they’re like, ‘You were in the movie, why are you covering your eyes while you’re watching yourself?’

“I think we (the cast) are the most in the dark because you’re doing it, but you don’t get to see it, so it’s always a nice surprise seeing everything put together. You’re like, ‘Oh, it worked!’.” The Blackcoat’s Daughter, about two boarding school students who get caught up in a series of slayings, premiered in New York on Wednesday night (22Mar17), and Emma reveals that while she was shaking in her seat, the film became too much for her teenage sister Grace to bear. The actress added, “My little sister… was at the premiere last night and she actually had to leave the movie because she got so scared! So that’s how scary it is, but in a good way. I mean, it’s fun to be scared sometimes.”

The post Emma Roberts Gets Scared at Her Own Movies appeared first on Womenz Magazine.

Kendall Jenner Was Reluctant to Testify Against Stalker