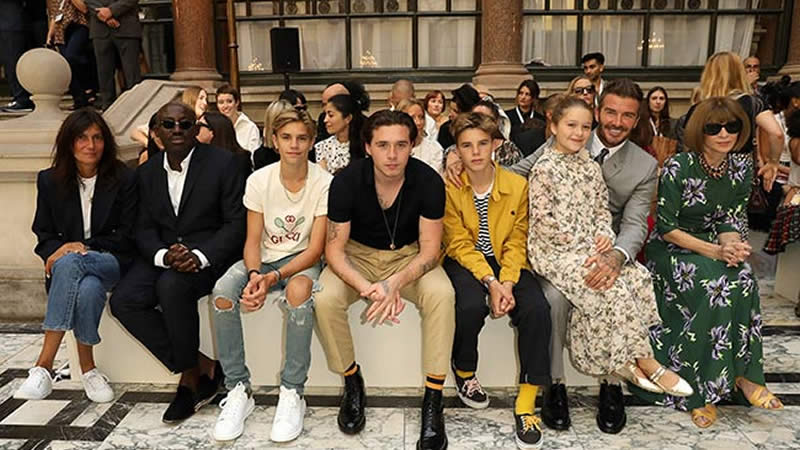 The fashion designer is preparing for her show on Monday

Victoria Beckham is hours away from showing off her latest collection at London Fashion Week, but she still has plenty of time to get all glammed up backstage!

The fashion designer gave fans a behind-the-scenes look at the preparations over the weekend, showing off some of her favourite pieces from the Spring/Summer 2021 collection ahead of her show on Monday – and we are a little obsessed with her colourful outfit.

“Head-to-toe in #VBPSS21,” VB captioned a photo on her Instagram Stories. In the mirror selfie, the 46-year-old looked as chic as ever dressed in high waisted blue trousers, with contrasting dark pockets, which she paired with a striped blue, green and red jumper. To break up the colour-clashing look, she added a brown leather belt.

“Mask on, ready for presentation rehearsals,” she continued. Although Victoria only appeared to accessorise her look with a white and blue striped face mask, she later revealed gold hoop earrings and a matching necklace from Tiffany were also part of her outfit.

Despite this season’s show being very different, with LFW operating a ground-breaking half live, half digital schedule for the first time ever due to COVID-19, Victoria did not let it affect her glam squad.

In a video, Victoria could be seen getting her hair done by not one, not two, but three hairstylists, prompting her to joke: “I think I need more hairstylists @paulhanlonhair.” The former Spice Girl could be heard saying: “It’s quite an intense process having a ponytail.”

This comes shortly after VB showed off her hair transformation, as Luke Hersheson, Creative Director and Co-Founder of Hershesons, trimmed the ends of her brunette hair. “Haircut for fashion week!” Victoria captioned a photo on her Instagram Stories, which showed shorter strands of hair framing her face.

Even if Victoria’s show is digital and she can’t have the whole Beckham clan on the FROW to support her, it’s still set to be an exciting day…