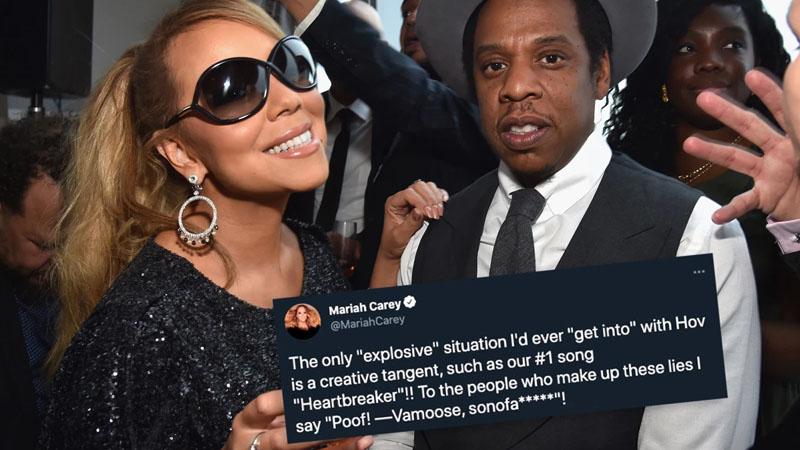 American singer Mariah Carey who recently dropped out of Jay-Z’s management company Roc Nation is breaking her silence on rumours that the two superstars had a falling out. If rumours are to be believed, Mariah reportedly parted ways with his management company post a “blazing row” with Jay-Z during a meeting regarding the future of her career.

Now, clearing the air. Mariah took to Twitter and wrote: “The only ‘explosive’ situation I’d ever ‘get into’ with Hov is a creative tangent, such as our #1 song ‘Heartbreaker’!! To the people who make up these lies I say ‘Poof! —Vamoose, sonofa*****’!”

A few days ago, a source via The Sun informed, “Mariah and Jay had an explosive meeting which did not go well at all. She has made it clear she wants nothing more to do with him and has called it quits with Roc Nation. She will formally depart in the next few weeks.”

It was also reported that Mariah has been looking at other management companies and may have even found one that she will choose for her career ahead. It seems amid her exit from Roc Nation, Carey has already got some major news relating to her upcoming album announcement and world tour.

The source also stated: “There is a heavily R&B- influenced album being finalized at the moment and she is planning a world tour for next year, so she isn’t letting this stand in her way.”  The news of Mariah’s new album must have surely come as a major surprise for fans given that it will be the first from Mariah since her 2018 release, Caution. As for Mariah and Jay-Z’s past collaborations, the duo has worked in the past on singles including her 1999 song Heartbreaker and his song Things That U Do.

Why Won’t The Queen Totally Cut Off With Prince Harry? Royal Expert Reveals…

Robert Pattinson’s Batman Will Reportedly Be Very Brutal And Violent