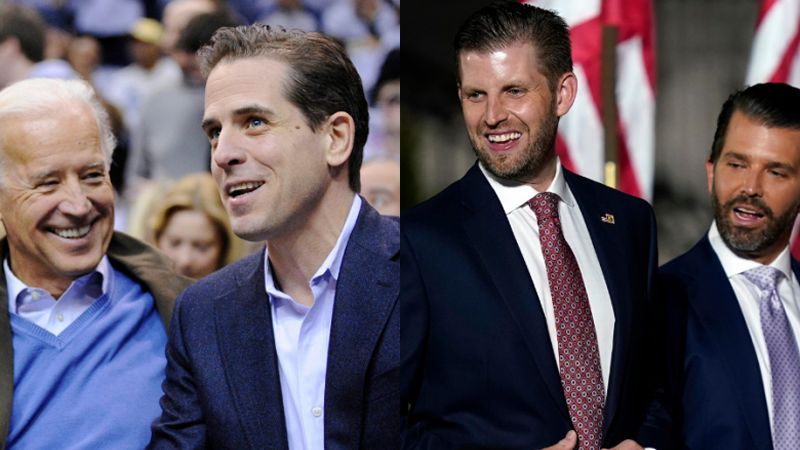 For a time, Hunter Biden was the frequent target of former President Donald Trump’s presidential campaign, often called out by sons Donald Trump Jr. and Eric Trump who slammed him for using father President Joe Biden’s name to personally enrich himself (a claim that Vanity Fair reminds us no one in the Trump family has any business making).

As recently as March 2020, Donald Jr. invited Hunter Biden to personally debate him to see who benefited more from their father’s time in public office — and Hunter, who long held his tongue on these attacks, has finally snuck in a response to Trump’s offspring in his new memoir Beautiful Things. Going after Donald Jr.’s claims that he used the Biden name to get lucrative jobs at private companies, Hunter Biden fired back that his last name being an asset in the world of business was an inevitability — as they themselves might know if they ever sought jobs outside of their father’s organizations.

In the memoir that takes us all the way through his experience of President Biden’s 2020 presidential campaign, Hunter Biden writes of his lucrative position with Ukraine oil and gas company Burisma that raised so many questions from Trump supporters and family alike. Biden knew that a Ukrainian company that was hoping to gain Western allies in resisting Russia’s influence would find his last name to be a plus.

“There’s no question my last name was a coveted credential. That has always been the case,” he wrote. “Do you think if any of the Trump children ever tried to get a job outside of their father’s business that his name wouldn’t figure into the calculation? My response has always been to work harder so that my accomplishments stand on their own.”

In the pages that follow, Biden goes on to list his accomplishments in corporate governance, asserting: “So, yes, I brought something besides my name to the Burisma board’s table.” He also insists that to find a role where nepotism was not a factor in his getting hired would have been nearly impossible: “The fact is, there was almost nowhere in the world that didn’t somehow cross my father’s spheres of influence.”

Had Donald Jr., Eric, or Ivanka Trump looked beyond the Trump Organization (or Trump administration) for roles, Biden seems to be suggesting, they would know that he can’t help the nepotism he faces on the job market.

While criticisms of nepotism are important, we’re not sure that either Hunter Biden or one of Donald Trump’s children are best suited to address them. As Biden points out, his name follows him wherever he goes. And the question of whether he experienced more nepotism in an outside company than Donald Jr. does working for his own father does not necessarily seem like a worthy one to explore.

Oprah Winfrey Shares the Traumatic Childhood Moments That Stuck With Her