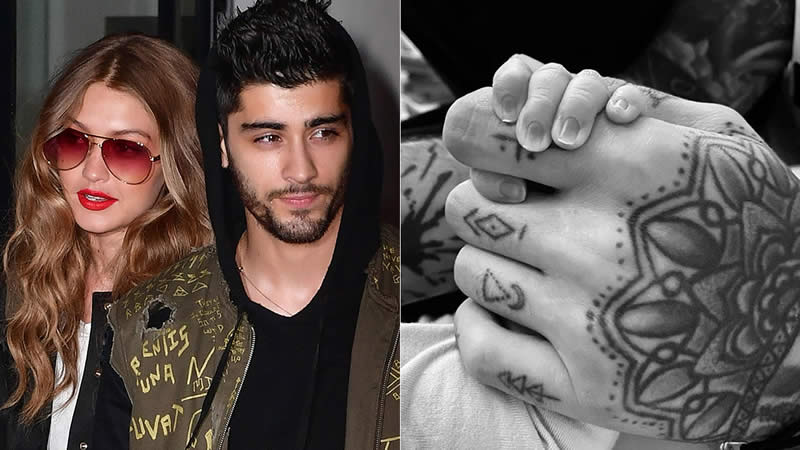 Gigi Hadid had a very special Sunday with her two Valentines, her boyfriend Zayn Malik and their four-month-old daughter Khai.

The supermodel kept fans updated on their special day over the weekend and shared several never-before-seen pictures of the pair, who have been dating since 2015.

“I love you, Valentine && love the Valentine we get to share forever,” Gigi captioned a black and white picture of them taken last month during Zayn’s birthday party. She also shared several selfies, Zayn’s gift to her and him proudly showing off his ‘dad’ mug.

The mother-of-one, however, left the best picture till last, sharing the cutest snap of Zayn pushing baby Khai’s pram as they headed out for a walk together. The picture seems to have been taken shortly after the birth in Gigi’s Pennsylvania ranch, where Khai was born.

The adorable post comes just weeks after the 25-year-old opened up about her 14-hour labour, revealing that Zayn caught the baby without even her realising.

“It didn’t even click that she was out,” Gigi told Vogue magazine. “I was so exhausted, and I looked up and he’s holding her. It was so cute.”

Talking about her natural labour, which was witnessed by Zayn, her mother Yolanda and sister Bella, she added: “When you see someone do that, you look at them a bit differently. I probably looked crazy, actually,” she added. “I was an animal woman.”

Gigi admitted that she had planned to give birth at a New York hospital, but due to COVID-19 restrictions there was a limit on who could be in the delivery room, and so the couple decided a home birth was the right choice.

“I know my mom and Zayn and Bella were proud of me, but at certain points, I saw each of them in terror,” Gigi added, before admitting she is in no rush to have a second baby. “Afterward, Z and I looked at each other and were like, ‘We can have some time before we do that again.'”

Gigi and Zayn announced the birth of their daughter back in September, but have still not shared a photo of Khai’s face – much to their followers’ disappointment! The couple have both, however, posted numerous snaps of the tot’s head, hands and feet.