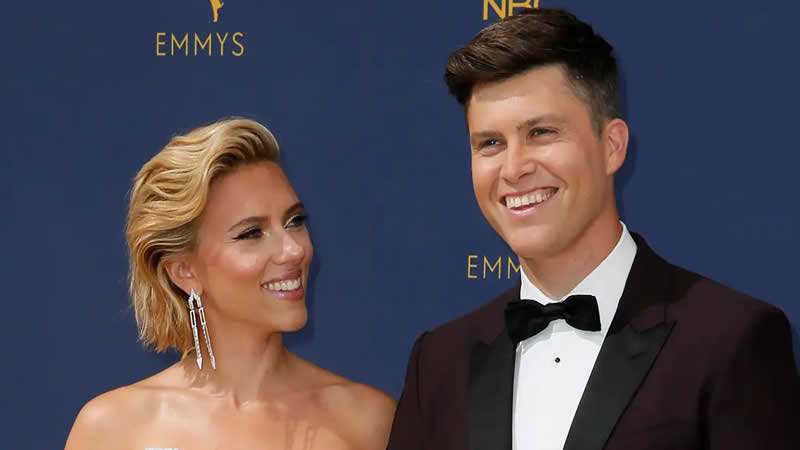 Colin Jost got candid about meeting his now-fiancee Scarlett Johansson in his latest book A Very Punchable Face: A Memoir; the SNL host admitted that the Avengers star was intimidatingly sophisticated. See the comedian’s full statement below.

Saturday Night Live host Colin Jost got candid about meeting fiancee Scarlett Johansson. According to Colin’s new book A Very Punchable Face: A Memoir, his first impression of Johansson was that she was “beautiful, smart, sweet and intimidatingly sophisticated.” The pair met on the set of SNL in 2006, which happened to be his first year as a sketch writer on the show and her first time hosting. “I got eight sketches on the show my first year, including one cold open and a parody of MTV’s My Super Sweet Sixteen, starring first-time host Scarlett Johansson,” he recalls.

“She had just turned 20 and I was 23, but in terms of status and maturing she was here (holds hand above head) and I was here (holds hand one inch off ground). She claims that she remembers thinking I was ‘cute,’ but I know what I looked like and that’s not the word I would have used. (‘Shaggy’ would have been generous. ‘Slovenly,’ more accurate).”

He goes on to describe the Avengers: Endgame star as having “a grace and a smile that I’ve still never seen in any other human.” As for the skit she starred in, he states, “The only line I remember from the sketch is when Scarlett’s bratty character says, ‘This party is literally worse than the Holocaust.’ That was my Shakespearean sonnet for the woman I would one day fall in love with.”

Colin Jost also writes that he’s even finding himself wishing he had kids with Scarlett. “I’ve met someone I love and who I feel more comfortable with than I ever have before. I feel more confident committing to what I’m working on and standing by whatever I create, regardless of whether people like it or not,” he shares.

He mentions that he recognised this desire for kids when he found himself wanting to participate in “human activities,” like birthdays and family gatherings, “I’ve even woken up on a Sunday after a show and thought, ‘I would love to be raising a baby right now!’ Which is a far cry from when I used to wake up on a Sunday and think, ‘Can I make it to the bathroom, or should I just puke on this plant?'” Though Scarlett and Colin have yet to tie the knot, they likely spend plenty of time with her daughter Rose, 5, who she shares custody of with ex-husband Romain Dauriac.

Kelly Rowland Gets Candid About Being Compared to Beyoncé