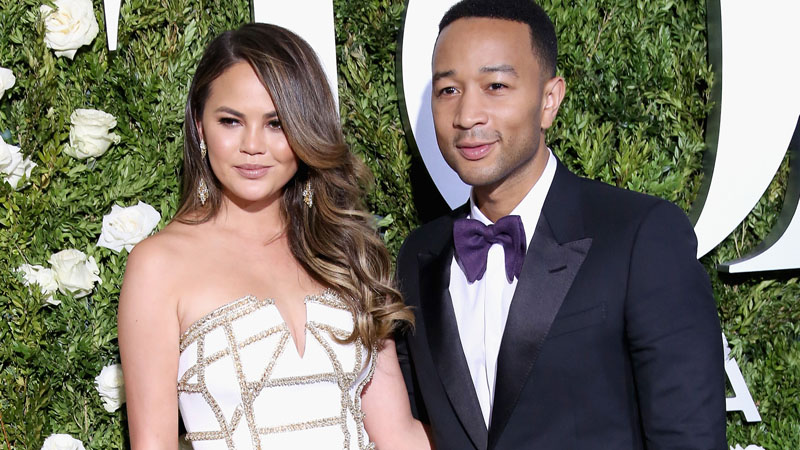 Is Chrissy Teigen begging her husband John Legend not to leave her to go on tour? That’s the story one tabloid is pushing this week. This week, OK! reports Chrissy Teigen has been “desperately leaning” on her husband, John Legend, amid her recent cyberbullying scandal. Now faced with the realization that Legend is going on tour this summer, Teigen is apparently in crisis.

An inside source spills to the outlet, “As it is, Chrissy freaks out if he’s busy at work she’s calling him every five minutes and interrupting his meetings.” Teigen came under fire recently when model Courtney Stodden revealed Teigen had extensively bullied her online when she was 16.

The idea of facing it all alone “is absolutely terrifying for Chrissy,” the insider dishes, adding, “It’s already causing her to meltdown.” According to the source, Teigen “can feel people holding their noses when they walk past her, and that’s making her even more needy and clingy. But John’s tour, which starts in August, is coming up fast — and there’s absolutely nothing she can do!” Teigen is reportedly at her wit’s end, and time will only tell how she handles her husband hitting the road.

So, is it true Teigen is spiraling ahead of Legend’s upcoming tour? It’s hard to say. Sure, it only makes sense that Teigen is going to miss her husband while he’s gone. And it’s no secret that Teigen hasn’t had an easy time amid the backlash that’s come with her bullying scandal. That being said, there’s no evidence suggesting she’s having a “meltdown.” We doubt anyone truly close to her is talking to the tabloids. Whoever this insider is, if they even exist, is clearly just speculating.

But there’s been a new spin on Teigen’s situation. Amid her openness about the hardships of being “canceled,” plenty of people have responded with a suggestion: Give back to those she’s hurt. While Teigen has understandably been reeling from the backlash, many people online are telling her this is the time to support organizations focused on preventing bullying and supporting those victimized by it.

Stodden, the one most notably affected by Teigen’s cyberbullying, said something similar. “I have a message for her,” Stodden began, “Continuing to gripe about being in ‘cancel club’ or whatever that is – I think, step out, take your part and maybe do something with charities. Step out and do something anti-bullying if she really means what she says – gets out, do something and it really helps the spirit. It does.”

So, while little is known about Teigen’s coping strategies amid the scandal, it’s possible Teigen is going to take this time to try to make amends. It’s also clear that whatever she does next, there’s no chance that the tabloid’s predictions will come true.

It seems the tabloids have taken Teigen’s bullying scandal as an excuse to relentlessly bully her. Not long ago, the National Enquirer reported Teigen was coping with stress eating and cosmetic fillers, resulting in a “disturbingly swollen” face. The magazines have also enjoyed casting doubt on Teigen and Legend’s marriage, insisting they were hanging by a thread or headed for a $150 million divorce. Clearly, the tabloids can’t be trusted to report accurately on Chrissy Teigen. – gossipcop