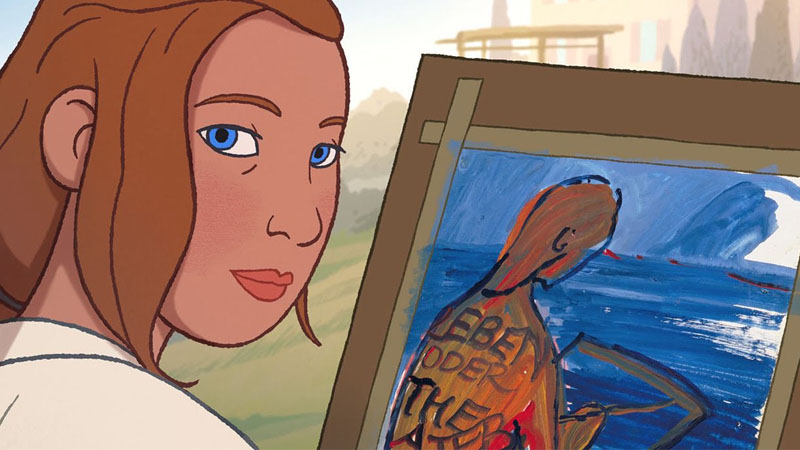 Good Deed Entertainment has released the trailer for Charlotte, its upcoming animated movie based on a true story. The movie follows a German-Jewish artist who starts to paint a masterpiece on the eve of World War II, and goes through all sorts of terrible situations while she tries to find the energy to finish her work. The movie comes to selected theaters in late April.

Considering that Good Deed Entertainment is the same studio that brought us Oscar nominee Loving Vincent, it’s no surprise that Charlotte also has a stunning look, especially when it comes to the story’s works of art. The Nazi party, just like any dictatorship, viewed art as a form of exposing discontent and questioning the status quo, so for people like Charlotte to continue producing their work through bleak times was an act of resistance — and one that put their lives at risk.

The trailer also provides a deeper look into the story: Charlotte Solomon’s life comes crashing down when the Jewish community starts to be taken and killed by the Nazis, and the young girl expresses her pain and desolation through her paintings. Fleeing to the south of France seems like a good option not to be in danger, but it’s only a matter of time before terror strikes again.

Charlotte premieres in select theaters starting on April 22, in New York and Los Angeles, followed by San Francisco, Columbus, and Phoenix on April 29, and Seattle and Winston-Salem on May 6, with additional cities to follow. Check out the all-new trailer below:

Charlotte is an animated drama that tells the true story of Charlotte Salomon, a young German-Jewish painter who comes of age in Berlin on the eve of the Second World War. Fiercely imaginative and deeply gifted, she dreams of becoming an artist. Her first love applauds her talent, which emboldens her resolve. But the world around her is changing quickly and dangerously, limiting her options and derailing her dream. When anti-Semitic policies inspire violent mobs, she leaves Berlin for the safety of the South of France. There she begins to paint again, and finds new love. But her work is interrupted, this time by a family tragedy that reveals an even darker secret. Believing that only the extraordinary will save her, she embarks on the monumental adventure of painting her life story.

[WATCH] Caitlyn Jenner Gets Chased Out Of Convention, Called “Bruce” And “Sick Freak”