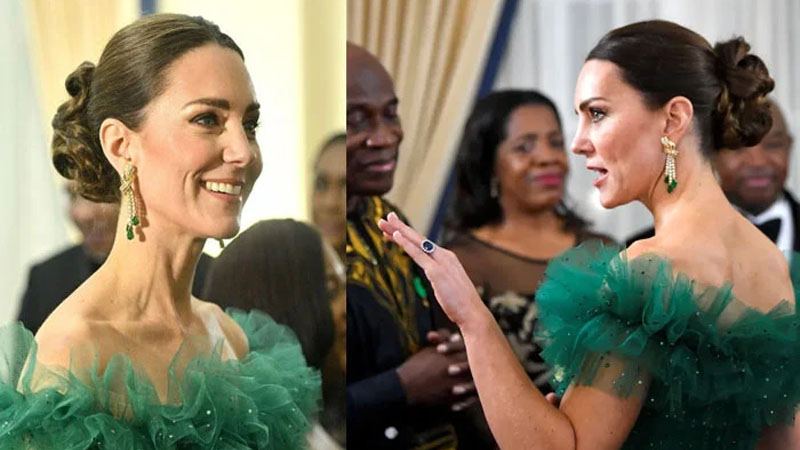 Kate Middleton is bringing her fashion A-game in Jamaica.

The Duke and Duchess of Cambridge had an official dinner at King’s House, the residence of the Governor-General of Jamaica, Sir Patrick Allen on Wednesday.

The Duchess of Cambridge wore a full-length green gown by Jenny Packham, accessorized with her Royal Family Order and the GCVO Star (Grand Cross of the Royal Victorian Order). Prince William also smartened up in a black tie for the dinner at King’s House, the official residence of the Governor-General of Jamaica.

“Definitely a Disney Princess kind of night!” wrote a fan. “Her gowns are impeccable and the cut is superb,” wrote a fan. A third commented: “Catherine truly is a vision in green, heavenly dress, glamorous hairstyle, magnificent jewels just wow.”

“Winning hearts like Diana with kindness,” another added. During his speech at the official dinner, William apologized to the nation for deep-rooted Britain practices of slavery.

“I want to express my profound sorrow. Slavery was abhorrent. And it should never have happened,” he said in a landmark speech in Jamaica on Wednesday evening that acknowledged his country’s role in the trafficking of people to the Caribbean and the United States.

Already in our short time here in Jamaica, Catherine and I are delighted to have felt what Bob Marley described so many years ago – the spirit of ‘One love’ that Jamaica has given to the world and which makes this country so special.

“As we heard for ourselves at the cradle of reggae music last night in Trench Town, when the Rasta drums start playing, you really do know how to have a good time,” the statement wrote.

“We deeply admire their dedication and commitment. Catherine and I only wish we had more time to spend with you all in Jamaica,” the couple concluded.

7 Ways to Upcycle Your Maternity Clothes After Pregnancy

London Fashion Week: Everything you need to know

How To Style Cardigans This Fall And Look Modern