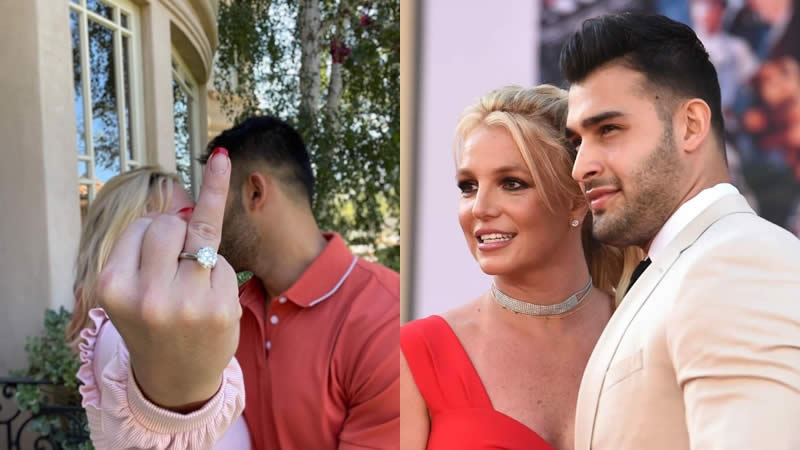 Singer Britney Spears has announced her engagement! After nearly five years of dating, the singer’s longtime boyfriend, Sam Asghari, finally proposed. Spears announced the news on Sunday with a sweet video of herself and Asghari on Instagram.

In the video, Asghari asks, “Do you like it?”

Shortly before Spears’ statement, Asghari foreshadowed the news on his own Instagram account, writing, “Biggest news… Can’t wait to share.” He then uploaded a photo of himself and Spears, with the singer showing off her stunning ring.

Asghari proposed to his girlfriend with a four-carat diamond ring from Forever Diamonds NY. The actor collaborated with Forever Diamonds Founder Roman Malayev to design a unique setting that combines “timeless elegance with thoughtful details,” according to the jeweler.

The solitaire setting has pavé decoration along the bridge, extra diamond detailing on the prongs and basket, and a “secret diamond” below the bridge. Asghari also engraved “Lioness,” his nickname for Spears, on the inside of the band.

Spears and Asghari first met in 2016 on the set of her music video “Slumber Party.” Throughout Spears’ battle to end her conservatorship, the actor has been a supporter.

She praised Asghari in August for helping her through “both the hardest and the best years of my life.” During her recent court testimony, the singer declared her wish to marry her longtime lover but claimed that her conservatorship stopped them from doing so.

From 2004 to 2007, ‘I Wanna Go’ and ‘Swimming in the Stars’ singer was married to Kevin Federline, the father of her two children. She was also married for just 55 hours to childhood friend Jason Alexander in 2004.