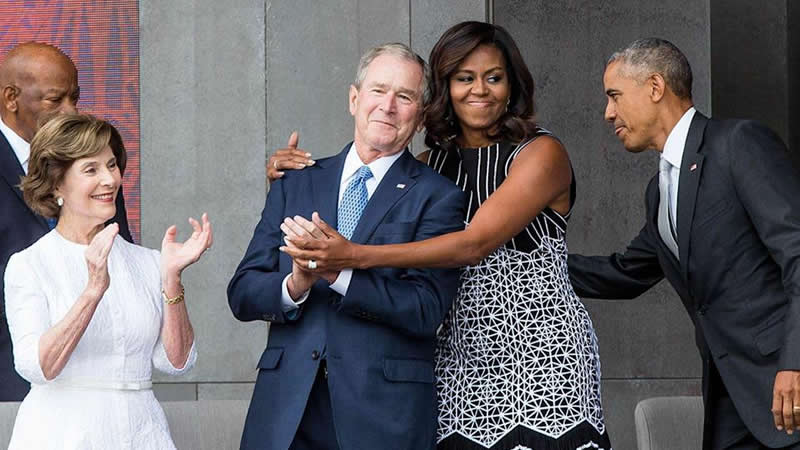 George W. Bush had no idea that his bipartisan bond with Michelle Obama would lead to such a big reaction from the American public that is still felt today.

In a new interview with CBS News’ Norah O’Donnell, the former president, 74, spoke about his friendship with the former first lady, 57, which first became apparent to the public when the pair — who come from opposite political parties — shared a hug at the Smithsonian National Museum of African American History and Culture in Washington, D.C. in 2016.

“The big hug, yeah,” Bush said in reflection, before adding that the moment between him and Mrs. Obama that “became more famous” was actually when they exchanged candy at the 2018 funeral of John McCain.

“It shocked me,” the 43rd president said of the public reaction to his bond with the Becoming author. “We got in the car and I think Barbara or Jenna said, ‘Hey, you’re trending!’ The American people were so surprised that Michelle Obama and I could be friends.”

The Out of Many, One: Portraits of America’s Immigrants author added, “I think it’s a problem that Americans are so polarized in their thinking that they can’t imagine a George W. Bush and a Michelle Obama being friends.”

Over the years, Mrs. Obama has similarly spoken about her fondness for Bush and the public’s reaction to their bipartisan bond. In December 2019, she told his daughter, Jenna Bush Hager, that despite being of different political affiliations, they still share the same values.

“I had an opportunity to sit by your father at funerals, the highs and the lows, and we shared stories about our kids and about our parents,” Mrs. Obama told Bush Hager during a Today interview.

“Our values are the same,” the Waffles + Mochi star added of herself and Bush. “We disagree on policy, but we don’t disagree on humanity, we don’t disagree about love and compassion. I think that’s true for all of us — it’s just that we get lost in our fear of what’s different.”

Also during his CBS News interview, Bush spoke about the differences between himself and former President Donald Trump, whom he never publicly supported despite being of the same political party.

“I feel a responsibility to uphold the dignity of the office,” Bush told O’Donnell. “I did then, and I do now. And I think it’s undignified to wanna see my name in print all the time. I think it basically sends a signal that I miss being famous and, you know, I want people to see me. Listen to me And, you know, I don’t. I really don’t.”

When O’Donnell asked if he felt “humbled” by his years in the White House, Bush replied: “Totally. To me, humility shows an understanding of self. It shows a belief in a higher power that is necessary to be an effective leader. And we were short of humility.”

Bush also addressed the strict immigration rules that Trump, 74, enforced during his four years in office. The controversial policies contrasted Bush’s belief in supporting pathway to citizenship for undocumented immigrants, assuming they pass a background check and pay back taxes.

“The problem with the immigration debate is that one can create a lot of fear: They’re comin’ after you,” Bush said. “But it’s a nation that is willing to accept the refugee or the harmed or the frightened, that to me is a great nation. And we are a great nation.”

Kylie Jenner’s Latest Photo of Stormi Webster Will Have You Asking, “Is That a Chicken?

Paula Abdul Goes Under the Knife for ‘Breast Revision’, Reason behind?