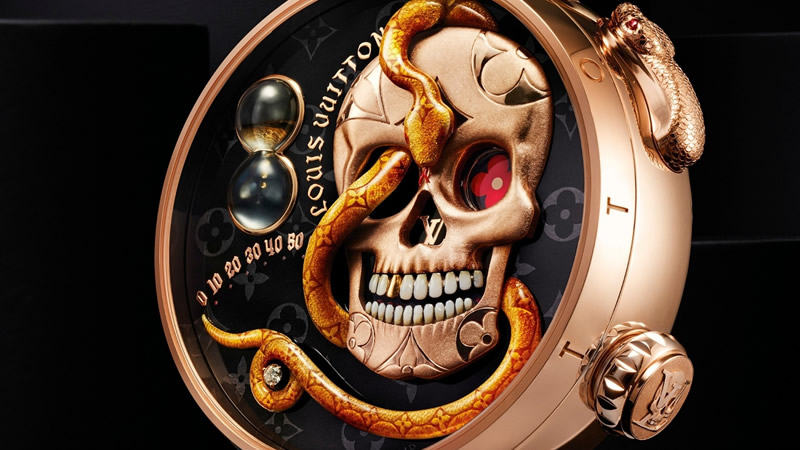 Louis Vuitton has presented the Carpe Diem watch at Watches & Wonders 2021. Based on a Jacquemart – an automata created to strike the hours on church bell towers – the striking watch features a push-piece that activates the dial’s miniature scenery where a snake and a skull indicate time.

“Our aim was to get off the beaten track,” said Michel Navas, master watchmaker at La Fabrique du Temps Louis Vuitton. “We wanted to bring to the Jacquemart our vision of the 21st century with all the energy and creativity characteristic of our brand since it began producing watches in 2002.”

For its Carpe Diem watch, Louis Vuitton has created four watch complications – a jumping hour, a retrograde minute, a power reserve display and the mechanism of the automata of which there are also four. “The prowess was to create a mechanical movement that is quite powerful to integrate and smoothly operate all these functions that had never been brought together before,” Nava explained.

Time can be read on demand on the watch by pressing the reptile-shaped push-piece on the side of the case. The central snake’s head lifts to reveal the hour aperture positioned on the forehand of the skull, while the rattlesnake tail oscillates towards the minutes, placed below the power reserve hourglass. The skull’s jaw emits a mocking laugh from which emerge the words carpe diem (seize the day) and hence the name of the watch. the whole spectacle lasts 16 seconds.

Entirely developed and assembled at La Fabrique du Temps Louis Vuitton, this calibre LV 525 demonstrates true high-watchmaking prowess and is currently the subject of several patent applications. Another unique feature of the tambour Carpe Diem is the design of its movement. Visible on the back of the timepiece, the calibre has been assembled in the shape of a skull, echoing the vanitas on the dial.

As for the vanitas dial, the skull recalls 15th-century pocket watches and clocks where images of skulls, skeletons, and hourglasses served as allegories of the passing of time. The delicacy, transparency, and colors of the enamel, which are particularly remarkable and realistic on the teeth of the Jacquemart, enhance the relief on the dial, suggesting – even when the hour has not struck – the idea of movement, inspiring the protagonists of the tambour Carpe Diem in a celebration of existence. Also, we would recommend you to check our post about the most expensive watches in the world.

George W. Bush Says He Was ‘Shocked’ by Public Reaction to His Friendship with Michelle Obama