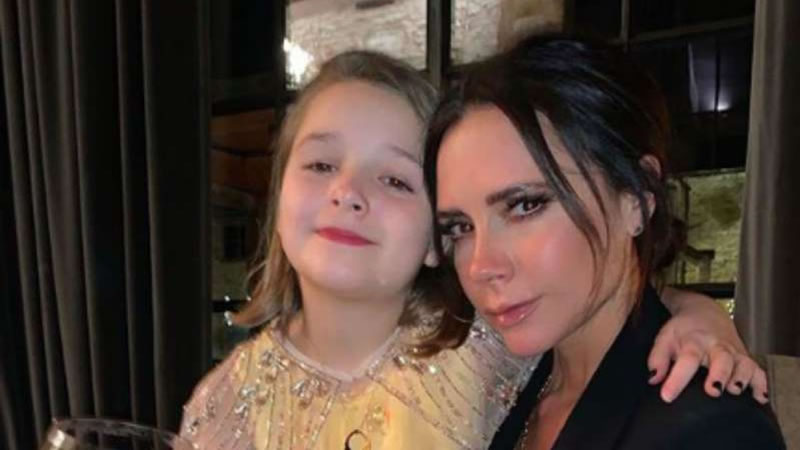 Victoria Beckham caused a huge reaction amongst her fans after sharing a photo of herself and daughter Harper on Tuesday night.

The fashion designer enjoyed a sweet mother-daughter moment with the nine-year-old as they mirrored each other in pretty dresses for a cute selfie.

Victoria pulled her signature peace sign pose as she modelled an elegant black mini dress, while Harper looked adorable in a pretty white frock as she smiled for the camera. Captioning the photo, Victoria wrote: “Kisses from posh and baby posh.”

Needless to say, VB’s fans loved the snapshot of Victoria and her mini-me. One simply wrote: “That is absolutely beautiful to see. It made our day. Love you, Posh Spice!!! Thank u.” Another penned: “Mum and daughter goals.”

A third wrote: “Aww. This is very sweet.” A fourth added: “This has made me smile so much!”

It’s not the first time Victoria has caused a stir with a photo of Harper. Earlier this month, she shared two sweet throwback pictures of Harper backstage at her London Fashion Week show in February.

However, Harper’s choice of dress received a mixed reaction, with the youngster opting to wear one of her mother’s womenswear designs. “Harper’s favourite print this season! My mini me and Ruta (who made her dress) at her final fitting before the #VBAW20 show x vb”, Victoria wrote in the accompanying caption.

Harper posed backstage at Victoria’s LFW show back in February

Fans were left divided by the post, with some saying they loved the dress but didn’t think it was suited to someone so young. “Is this a dress for a child?”, one fan wrote. “Bit frumpy for a child”, another commented.

Defending Victoria’s choice to dress Harper in the garment, one loyal fan replied: “I think it looks beautiful and age-appropriate on her. In fact, having now seen it on her, I think it suits her age better than a grown woman!” “Beautiful Harper and beautiful dress”, a third follower commented, while another enthused, “an amazing dress”. We totally agree.