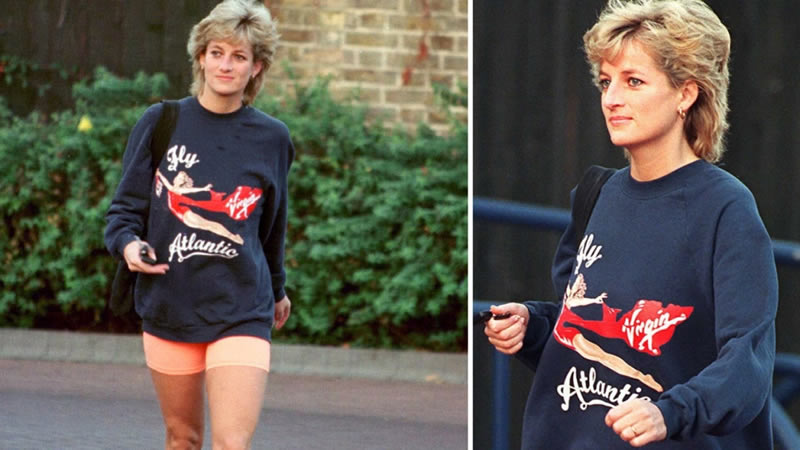 Not many people can make an ordinary sweatshirt iconic, but Princess Diana was obviously an extraordinary person who managed to do just that with her go-to gym outfit. The Virgin Atlantic sweatshirt she usually wore even sold for $53,532 last year. But have you ever wondered about the fitness routine she followed while donning the casual workout attire?

Although she was determined to fit exercise into her busy schedule, Diana’s duties as a mom always came first. According to In Style, Diana liked to start her days off with a quick swim — but would skip that and simply do a few stretches before breakfast if Prince William or Harry needed her. Other than that, she would try to squeeze in at least three 30-minute gym sessions each week.

Jenni Rivett, Diana’s personal trainer for seven years, also described her royal client as “incredibly dedicated” to the “vigorous exercise” she’d plan for the princess. Diana clearly made sure she was getting the most out of her her half hour work outs!

Rivett hasn’t spilled more specific details on the types of activities the pair would do together, but you can follow her on Instagram to get an idea of the tips she likely gave to Diana. Check out one of Rivett’s favorite moves, which she recently shared in the clip below:

The focus on a healthy lifestyle helped Diana cope with her divorce from Charles, Rivett revealed. For example, she claimed the pair’s ski trip to Vail, Colorado, one Christmas was done in order to help Diana deal with William and Harry spending the holiday season with their dad instead of her. We can definitely relate to how breaking a sweat can help ease a broken heart.

As for her diet, Diana was a big fan of nutrient-rich meals like her favorite stuffed peppers. According to former royal chef Darren McGrady, she told him, “Darren, you take care of all the fats, I’ll take care of all the carbs at the gym.” It was her cheeky way of requesting that he keep her meals low-fat, but letting him know she’d still enjoy some carbs on the plate (which she’d work off with her exercise). We love how Diana embraced this healthy balance!

The Single Greatest Workout for Turning Back the Clock