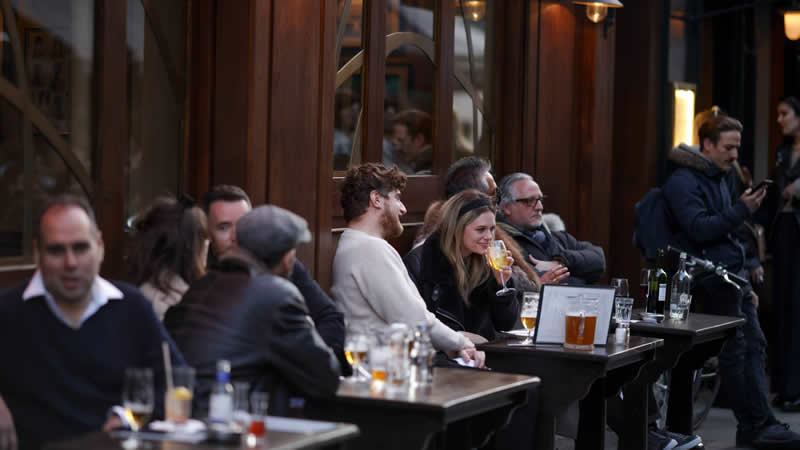 The U.K. variant of the coronavirus does not increase the severity of COVID-19 compared to other strains, according to research published Tuesday that also confirmed its increased transmissibility.

The variant, known as B.1.1.7., is now the dominant viral strain across much of Europe, and previous studies had shown it was linked to a higher likelihood of death than normal variants.

But two studies published in The Lancet Infectious Diseases and The Lancet Public Health journals found no evidence that people with B.1.1.7. experience worse symptoms or a greater risk of developing long COVID-19 than those infected with different variants.

The research found however that the variant was associated with a higher viral load and reproduction rate than normal variants.

Authors of the first study looked at data from 341 patients who tested positive for COVID-19 late last year when B.1.1.7. was running rampant across southeast England.

Of those infected with B117, 36% became severely ill or died, compared with 38% of those with non-B.1.1.7., suggesting that there was no association between B.1.1.7. and heightened risk of severe infection.

Patients with the variant tended to be younger, and infections of B.1.1.7. occurred more frequently in ethnic minority groups, the data showed.

The authors also analyzed the transmissibility by looking at data generated by PCR testing. They found that samples of B.1.1.7. tended to contain greater quantities of the virus than non-B.1.1.7. swabs.

Commenting on the first study, Sean Wei Xiang Ong, Barnaby Edward Young and David Chien Lye from the National Center for Infectious Diseases, Singapore, said that the findings were in contrast to three previous studies suggesting that B.1.1.7. was deadlier than other variants.

However they said the Lancet study had the benefit of having used whole-genome sequencing as well as a good variety of patient and disease outcomes.

“The finding that lineage B.1.1.7. infection did not confer increased risk of severe disease and mortality in this high-risk cohort is reassuring but requires further confirmation in larger studies,” said the experts, who were not involved in the research.

A second study analyzed self-reported data from 36,920 British users of a COVID-19 symptom app who tested positive between September 28 and December 27 last year.

They found that the B.1.1.7. the variant had a reproduction rate 1.35 times higher than normal coronavirus variants, but also found no evidence of increased disease severity.

DMX Leaves Behind An Unexpected ‘Fun Fact’ About Himself

Biden In ‘Regular’ Contact With Obama To ‘Consult And Talk About A Range Of Issues’: WH Official

VERIFY: Are there long-term side effects from the COVID vaccines?