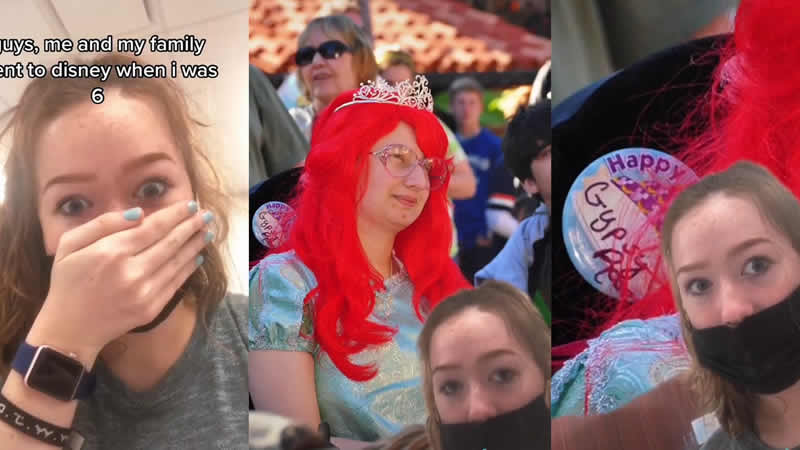 Tiktoker @annakateeh was looking over family photos from a Disney World vacation taken when she was 6 when she discovered something that gave her pause: Famous victim of Munchausen’s by proxy Gypsy Rose Blanchard and her mother, abuser, and eventual murder victim, Dee Dee Blanchard, present in the background.

Gypsy Rose Blanchard hit the headlines in 2015 after she enabled her boyfriend, whom she’d secretly met online, to kill her mother in order to escape a lifetime of abuse. The saga became an HBO documentary and she’s now serving a 10-year sentence.

Dee Dee Blanchard had begun fabricating serious illnesses affecting Gypsy Rose when her daughter was 8 months old, escalating to forcibly medicating her in order to induce symptoms within a few years.

Successfully convincing multiple doctors that her daughter was genuinely, seriously sick, Gypsy Rose was subjected to multiple, completely unnecessary surgeries and ended up losing all of her teeth due to side effects.

Dee Dee also convinced everyone that Gypsy Rose suffered from a serious cognitive impairment, giving her “the mind of a 7-year-old,” isolating her daughter, and ensuring that no one would ever listen to her if she did speak out.

Dee Dee also altered her daughter’s birth certificate as she got older, allowing her to pretend her daughter was still a minor and therefore still subject to her legal authority.

When Gypsy Rose escaped at 19, going to stay with a man she’d met at a sci-fi convention, Dee Dee uses this to force Gypsy Rose to come home with her where she smashed her daughter’s computer and tied her to a bed in order to prevent any future escape attempts.

Psychiatrist Dr. Marc Feldman described the impact of this on Gypsy Rose as the equivalent of being held hostage her entire life, and her actions after this as those of a hostage trying to escape from her kidnapper. Gaining access to another computer, Gypsy Rose met another man online and formed a relationship with him, eventually forming a plan to kill her mother together.

Prior to her death, Dee Dee Blanchard had used Gypsy Rose’s fabricated illnesses to acquire a lot of free stuff, ranging from a wheelchair-accessible house built by Habitat for Humanity to multiple trips to Disney.

It was during one of these that they met the TikToker and her family. Though @annakateeh barely remembers this it turns out that the Blanchards weren’t just passing through the back of their family photographs, they’d actually met and spoken to them as well.

Neither the TikToker nor her older family members realized there was anything wrong when they talked to the Blanchard family, with @annakateeh telling Newseek that they “talked to her and wished her prayers” before moving on with their holiday.

It wasn’t until her case entered the news cycle years later and @annakateeh’s parents recognized them on TV that the realization of what they’d actually seen sank in.

Doting mother Gigi Hadid seen out and about with daughter Khai