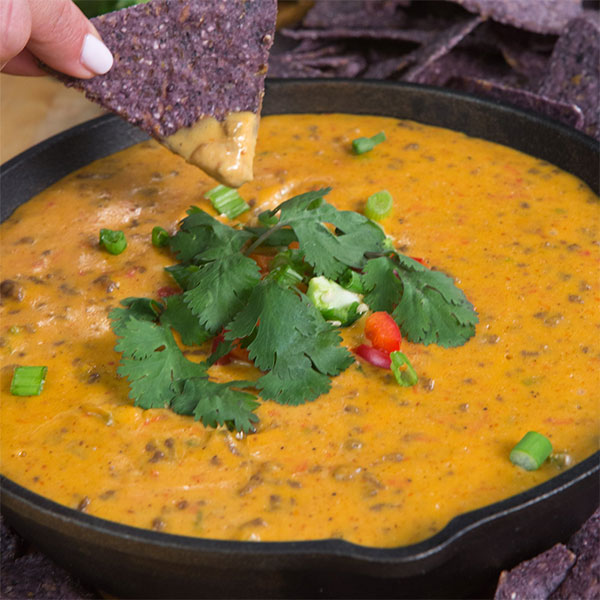 Let’s be honest: the only important part of game day is the food. If you’re like me, the only touchdown you’re interested in scoring is serving the perfect chicken wings, queso dip, and chili. To fuel your inspiration for the ultimate game-day feast, look no further than the following popular recipes from some of your favorite Food Network personalities and food experts. Alton has you covered on wings, Ree Drummond’s got the ultimate queso, and Giada de Laurentiis gets extra points for her homemade mozzarella sticks. Go team!

It’s hard to choose a favorite game-day recipe from Alton Brown, but he’s pretty well known for his buffalo chicken wings. All you need (besides the wings) is butter, garlic, salt, and hot sauce, and you’re on your way to perfectly roasted — not fried — spicy chicken wings that are just as good as any restaurant’s.

It’s not game day without guacamole, and Marcela Valladolid’s guacamole with fresh-baked tortilla chips is the way to go. Going the extra mile to make homemade baked tortilla chips totally pays off, and they’re the ultimate vessel for scooping plenty of lime- and cilantro-filled guac.

Cut up Sunny Anderson’s Southwestern quesadillas into party-ready portions, and you’ll be everyone’s favorite person. Be sure to make extra of the cilantro-lime sour cream, because everyone will want to dip their cheesy, spicy quesadillas in it.

Queso is arguably the most important part of game day, and Ree Drummond’s chile con queso is your go-to recipe. Even The Pioneer Woman admits there’s no shame in using a block of processed cheese for essentials like queso. In fact, it’s the best.

This Food Network Star winner is known for focusing on bold flavors, and his buffalo chicken cheese balls are proof. Any buffalo-chicken fanatic would be crazy not to try these bite-size appetizers that are perfect for feeding a crowd. He recommends taking a shortcut by using store-bought rotisserie chicken and combining it with hot sauce, cheddar, and scallions before rolling the balls into a crunchy panko breadcrumb coating. The homemade blue cheese dip is what really takes this dish to a new level.

Southern comfort foods are always a good idea for game day, especially Trisha Year wood’s cornbread-chili casserole. Everything you love about chili is covered in a buttery, crumbly cornbread topping, and a generous sprinkling of cheddar cheese and dollop of sour cream takes it over the top.

Not only is John Legend famous for his mac and cheese, but he also makes a pretty mean chili. John’s chili, as Chrissy Teigen calls it in her cookbook, Cravings, packs a serious flavor punch with chili powder, red pepper, garlic, and the secret ingredient: Lawry’s Seasoned Salt.

The post This Is How All Your Favorite Food Stars Do Game Day appeared first on Womenz Magazine.

Camila Cabello: ‘My Love Life is No One Else’s Business’