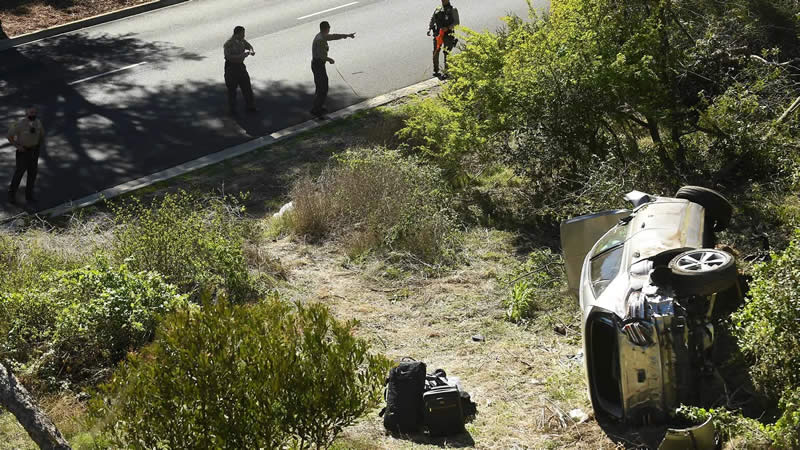 In the early morning hours of Memorial Day in 2017, a police officer in Florida observed a black Mercedes stopped on the road in the right lane with its brake lights on and the right blinker still blinking.

The officer then approached the driver, who was asleep at the wheel and had to be woken up.

The driver said he did not know where he was and acknowledged that he “takes several prescriptions,” according to the police officer’s affidavit. One of the prescription drugs found in his system was the sleep medication zolpidem, which is commonly known as Ambien.

Nearly four years later, on Feb. 23, Woods was found off the road in a crashed car by a local resident who said Woods was initially unconscious. A Los Angeles County Sheriff deputy at the scene asked Woods how the crash occurred.

Despite those statements, Sheriff Alex Villanueva said there was no evidence of Woods being impaired. The sheriff’s department therefore didn’t request blood evidence to check for drug use, prompting another question surrounding the incident: Was this latest crash another case of Woods driving on Ambien?

Experts say the evidence supports that suspicion, including the way they say his vehicle left the road as if he had been asleep at the wheel.

Then there’s his history. After another single-car crash in Florida in 2009, Woods was found unconscious in his SUV and snoring, according to a witness statement in a police report. Woods later acknowledged he used Ambien but didn’t directly answer when asked at a news conference if Ambien played a role in that crash.

The experts contacted by USA TODAY Sports cautioned that they couldn’t draw conclusions yet and that there could be other explanations for what happened, such as other medicines or a medical emergency.

“But I know where you look at the prior conduct and suspect there may be something else here at play,” said Charles Schack, a former New Hampshire state police trooper who is now president of Crash Experts, which analyzes traffic accidents for law firms and insurance companies.

The investigation into the crash on Feb. 23 is still active, though the actual cause may never be known without a toxicology report on Woods.

Schloegl said the sheriff’s department lacked the “probable cause” necessary to obtain approval from a judge for such a warrant. He noted that first responders observed Woods to be alert after he crashed his SUV.

But the fact that Woods was awake on the scene after the crash is not in dispute. Whether he was conscious when his vehicle drifted into the median and off the road is an open question.

Woods, 45, suffered multiple broken bones in his lower right leg, jeopardizing his golf career. Woods was wearing a seatbelt, and “the majority of vehicle airbags had deployed,” according to a deputy’s affidavit sworn on March. 1. The affidavit did not mention any head injuries other than “injuries/lacerations to his face” with blood on his face and chin. Airbags can cause facial injuries but also combine with seat belts to help prevent head trauma.

With Ambien, the warning label says side effects may include “sleep-driving,” which is described as driving while not fully awake and then not remembering it.

“Peer-reviewed scientific research has shown that Ambien usage among drivers has been associated with reports of amnesia, despite remaining interactive with the environment,” said Rami Hashish, principal at the National Biomechanics Institute, which analyzes the cause of accidents. “So the current available evidence may be consistent with ‘sleep-driving.’”

Such sleep-driving is familiar to former police detective Jonathan Cherney, who now works as an accident reconstruction expert in Southern California. He said he has investigated several car crashes in which Ambien was involved.

“I can tell you I do not recall a case where the driver had an independent recollection of what occurred immediately prior to the actual collision itself,” Cherney told USA TODAY Sports. “Now that’s not to say that there are some drivers who may recollect what happened, but I personally do not recall any who were able to provide a detailed description of how a crash occurred.”

Cherney and other car accident reconstruction experts told USA TODAY Sports that the evidence indicates Woods wasn’t paying attention and had a “very delayed response” to the emergency at hand on the morning of Feb. 23 near Rolling Hills Estates.

Cherney previously said it was “like a classic case of falling asleep behind the wheel, because the road curves and his vehicle goes straight.” Cherney walked the scene after the crash and said he saw no evidence of steering input or braking on the road. The other independent experts cited in this story are not involved in the sheriff’s investigation and are making observations based on the available evidence.

To learn more about what happened, the sheriff’s department recently executed a search warrant to obtain the “black box” data from Woods’ vehicle, which could include his speed, steering, braking and acceleration activity shortly before impact.

Woods was traveling north on a curved downhill road when his vehicle went straight into the median on the left instead of staying with the road as it curved right. His vehicle, a Genesis GV80, then took out a sign in the median, traveled into opposing traffic lanes, went off the road, hit a tree and rolled over. He traveled about 400 feet after hitting the median, in a relatively straight line, with no apparent evidence of steering input or braking in the form of skid marks.

The evidence didn’t seem to indicate that Woods was merely looking down at his phone momentarily or that he was simply fatigued.

“If a driver falls asleep and strikes a curb or somehow travels off the roadway, typically the jarring of the vehicle is enough to waken the driver, and then the driver makes some sort of reaction or overreaction,” said Schack of Crash Experts, which is part of the Expert Institute, a network that provides expert witnesses in litigation. “There is usually some evidence. If there isn’t, and he continues traveling 400 feet, you would think some sort of reaction would have taken place. … The lack of reaction really goes beyond what you would expect for simple fatigue and you start looking into other factors that may have played a role in this.”

Schack noted that “even with anti-lock brakes, there would be some evidence of braking and deceleration,” such as faint skidding. Villanueva said there were no skid marks.

“I don’t want to hang my hat solely on Ambien,” Schack said. “Certainly, Ambien could have been a factor here.”

Woods announced in January that he had undergone the latest of several surgical procedures on his back.

In 2017, after Woods was found asleep at the wheel, he was arrested for driving under the influence. In contrast to the recent crash, Woods’ speech at the time of his arrest was slow and slurred. He also failed sobriety tests.

A toxicology report later showed he had Ambien, Vicodin, Xanax, Dilaudid and THC in his system. He pleaded guilty to reckless driving, received one year of probation and was required to complete DUI school. He even checked into a clinic to get help for his use of prescription pain and sleep medications.

Woods made a statement regarding that case in 2017:

“Recently, I had been trying on my own to treat my back pain and a sleep disorder, including insomnia, but I realize now it was a mistake to do this without medical assistance,” he said.

In the 2009 incident outside his mansion in Florida, Woods crashed a Cadillac Escalade into a tree and fire hydrant, giving him a cut lip and sore neck. A neighbor at the scene then reported seeing Woods in the vehicle unconscious and snoring, according to a police report.

The Florida Highway Patrol determined then that there “was insufficient evidence available to issue a subpoena for additional medical information that may exist in this case.”

Woods was cited for careless driving and fined $164.

Woods was asked about his Ambien use several months later when he appeared at a news conference for the Masters Tournament in April 2010.

Question: “Tiger, it’s been reported that you took prescription drugs, Ambien and Vicodin. Can you speak to when you started taking those, how you need them for tournament golf, if you did, and if you ever became addicted to either one of them or received treatment?”

Woods: “I have taken them, yes. I’ve had some, as everyone knows, pretty interesting knee situations over the years. I’ve had, what, four operations now on my left knee? And last year, with my torn Achilles, it hurt quite a bit at times. And, yes, I did take that. And I took, most of the time I was on the Ambien was when my dad was sick.

“When my dad died, that was a tough time in my life. And, you know, so that’s when, yes, I was taking that, some of those things, to help me sleep. And that’s about it.”

He said he had not received treatment for addiction to those drugs.

In another question, Woods was asked if Ambien played a role in the 2009 crash.

“You were described by the witnesses as mumbling, snoring,” a reporter stated.

“Well, the police investigated the accident and they cited me,” Woods replied. “And it’s a closed case.”

London Fashion Week: Everything you need to know