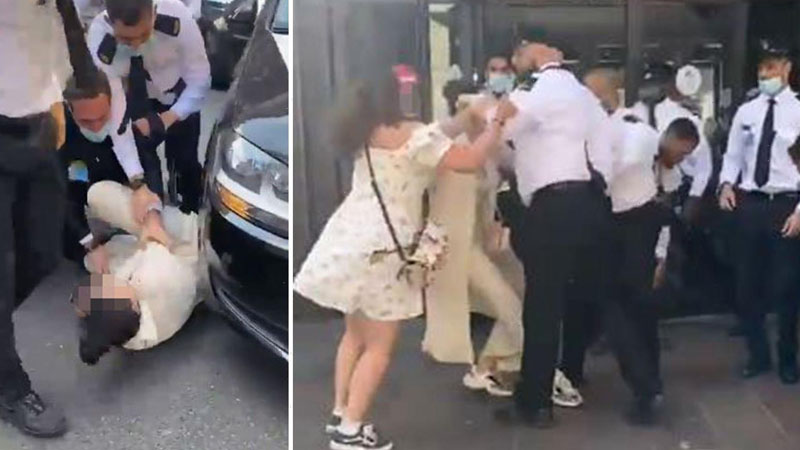 In London, a 20-years-old woman shows spitting in the face of a guard after being thrown out of the Knightsbridge store in the footage. Police claimed she was charged with a common beating. Dreadful video displays a woman Yursa Elmzouri being struggled to the floor after apparently spluttering in the face of a security guard outside Harrods in central London.

According to mirror.co.uk, the violent scene is believed to have unfolded after two women were removed from the Knightsbridge department store for allegedly refusing to wear face masks. Police were called and a 20-year-old woman has since been charged with common assault.

In the footage, 12 security guards are shown provoking two women in the street outside the well-known store. The guards prevent him from getting into the store when she resisted and spit into their faces.

One of the women shouts “What the f*** are you doing?” as a security worker tries to move her away from the entrance, protesting “I haven’t done anything wrong”. Other needs witnesses, who grouped on the pavement, to “record it”. As per The Sun, it is supposed the woman dressed up in a long cardigan had refused to wear a face mask.

In spite of a passer-by trying to interfere and another woman trying to pull her friend back, one of the central characters appears to lean forward and spit at one of the Harrods workers. After this action, she ran down to the street pursued by the security guards, who wrestle the alleged spitter to the ground in the middle of the road.

In a statement, Harrods said: “Harrods security was called following complaints of a group behaving aggressively within the store. “Our security team is trained to protect those inside the store against any behavior that may put our customers and employees at risk.

“When security attempted to remove the individuals, they resisted with force and reacted with extremely aggressive behavior, which included spitting at a security officer. “One of the individuals was later arrested and detained at the scene.”

The Met Police said a 20-year-old woman, Yuasa Elmzouri, from Holland Park, was charged with common assault and bailed to appear at Westminster Magistrates’ Court on Friday, July 2. A spokesman said: “Police were called at 17:06hrs on Thursday, 3 June to reports of an altercation in Brompton Road, SW1. Officers attended and it was reported a man was assaulted by a woman. “A 20-year-old woman was arrested on suspicion of common assault and taken into custody.”

WATCH: Joe Biden Completely Devolves Into Rambling Incoherence in Yet another Appearance