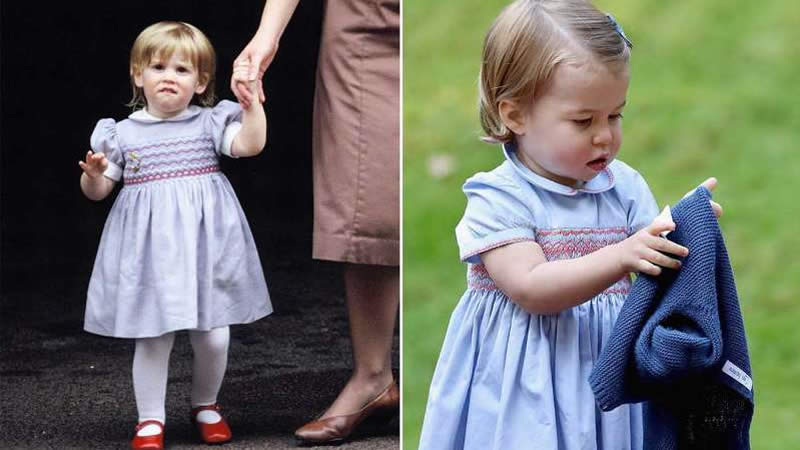 There has been plenty of uncanny resemblances spotted between the youngest generation of royals and their relatives. HELLO! has come across a childhood photo of Princess Beatrice and she looks almost identical to Princess Charlotte.

The Duke and Duchess of Cambridge’s five-year-old daughter is renowned for wearing hand-smocked dresses with Mary Jane shoes. We know fashion trends come around time and time again, but we wonder if Prince William and Kate took inspiration from some archive pictures?

Princess Beatrice, then aged 18 months old, was pictured outside The Portland Hospital in London (above), as she arrived to meet her newborn baby sister Princess Eugenie in March 1990. The Princess looked adorable in a blue and red hand-smocked dress with puffed sleeves and a Peter Pan collar. She also wore white tights and red Mary Jane shoes.

Beatrice’s outfit is remarkably similar to one worn by Princess Charlotte at a children’s party during William and Kate’s royal tour of Canada in 2016. The tot was dressed in a blue hand-smocked dress with coral embroidered details, frilled puff sleeves and a Peter Pan collar from Pepa & Co. While she was wearing blue Mary Janes for the occasion, Charlotte also owns a maroon pair from Doña Carmen.

Beatrice with Sarah, Duchess of York in August 1990

In more photos from the 1990s, Beatrice was also pictured wearing bows in her hair, which have since become synonymous with Charlotte, who has worn accessories from Amaia Kids.

Over the years we’ve seen the young royals wear family hand-me-downs, from Charlotte wearing one of her big brother George’s blue sweaters to Prince Louis wearing one of William and Harry’s outfits when he made his Trooping the Colour debut in 2019.