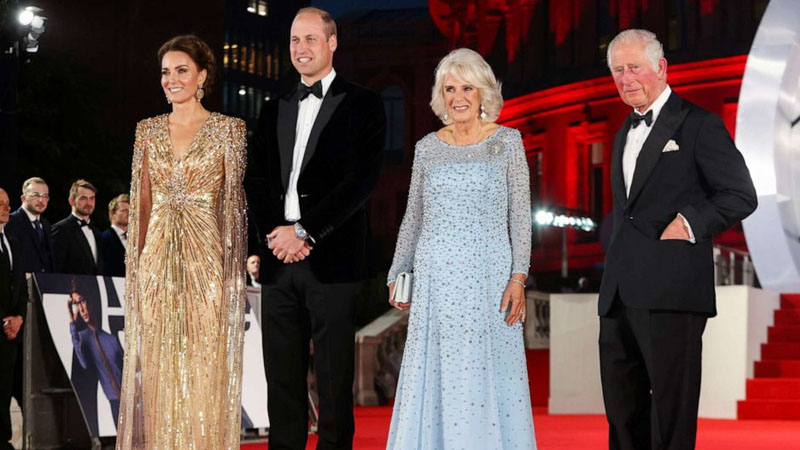 On Tuesday night, Britain’s royals joined movie stars on the red carpet of the international premiere of the James Bond movie, “No Time to Die”.

The Duke and Duchess of Cambridge, Prince William, and Kate, joined Prince Charles and the Duchess of Cornwall, Camilla, for a night out at the premiere.

The royal foursome walked the red carpet at London’s Royal Albert Hall, where they watched a special screening of the film, which is the 25th in the James Bond series and the final one to feature Daniel Craig as Bond.

The quartet met 007 star Daniel Craig and other cast members Rami Malek, Lea Seydoux, and Lashana Lynch, who usually only appear together at family events.

Before watching the film, the royal foursome was introduced to the screenwriter’s Phoebe Waller-Bridge, Neal Purvis, and Robert Wade, as well as singer Billie Eilish and her musician brother Finneas O’Connell, who co-wrote the new Bond theme song.

When the Duchess of Cambridge stepped into the line-up, BAFTA and Golden Globe winner Phoebe Waller-Bridge complimented her gown, saying “wow,” and Daniel Craig remarked, “You look jolly lovely.”

The Lord-Lieutenant of Greater London, Sir Kenneth Olisa, welcomed the royals and introduced them to producers Michael G. Wilson and Barbara Broccoli.

In 2015, William, president of the British Academy of Film and Television Arts (BAFTA), and Kate were joined at the premiere of “Spectre,” which also starred Craig as Bond, by William’s brother, Prince Harry.

Queen Elizabeth famously appeared with Craig, welcoming James Bond into her private sitting room and later “jumping” out of a helicopter, much to the surprise of the world.

William and Harry had previously attended the premiere of Craig’s second James Bond film, “Quantum of Solace,” in 2008.