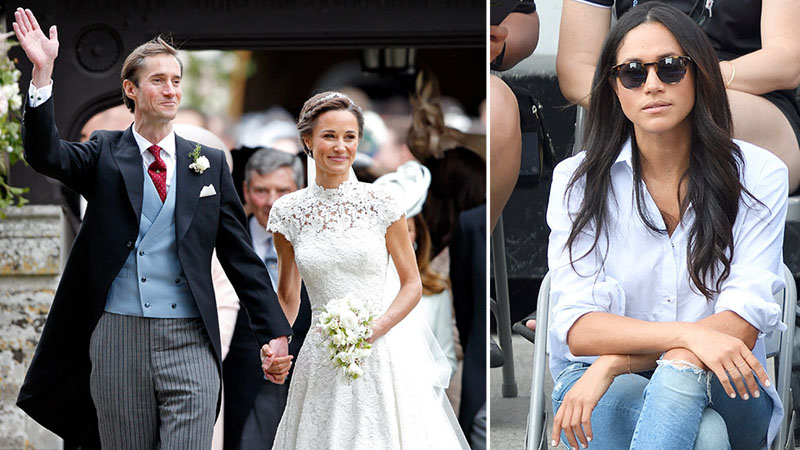 Little did they know this would cause far more drama than expected.

In yet another explosive insight from royal biography Finding Freedom, it was revealed that Pippa and her mum Carole Middleton invited Meghan to the nuptials, but “privately harboured concerns that the American actress’s presence alongside Harry might overshadow the main event”.

“Meghan put careful thought into her outfit, leaning heavily on Jessica Mulroney to pull together an ensemble that was stylish without being splashy when walking into church with Harry,” authors Carolyn Durand and Omid Scobie write.

“Her determination not to make a misstep at Pippa’s wedding was just one in many actions she took befitting a woman on track to becoming royalty.”

However, Meghan ultimately decided not to attend the wedding ceremony at St Mark’s Church, Berkshire, after a British tabloid compared Meghan and Pippa with the headline: “It’s Meghan v Pippa in the…Wedding of the Rears”.

Pippa made international headlines back in 2011 at her sister Duchess Catherine’s royal wedding to Prince William, when she flaunted her behind in a figure-hugging bridesmaid dress.

“Harry and Meghan agreed that she couldn’t possibly turn up at the church after the story suggested Meghan was about to upstage Pippa with her own ‘Pippa moment’”, the book states.

“If they worried their arrival might create a media circus despite taking every precaution, now they had no doubt it would.”

Instead, Meghan opted to just attend the reception and Harry dropped his girlfriend off at an Airbnb that a close friend and fellow wedding guest had rented before.

It was there that Meghan changed into a “decidedly unflashy long black gown” and did her own make up for the evening.

The book also states that bride Pippa had all the couples sit apart for dinner and that when Harry and Meghan were reunited they “spent most of their time chatting about their evening apart.”

“They called it a night close to 2:00 AM, a protection officer driving them back to Kensington [Palace].”

Back in July 2019, Pippa and Meghan along with Duchess Catherine attended the Women’s Singles Finals at Wimbledon.

A source close to Kate told the Finding Freedom authors: “They had a wonderful time. The whole day was lovely.”