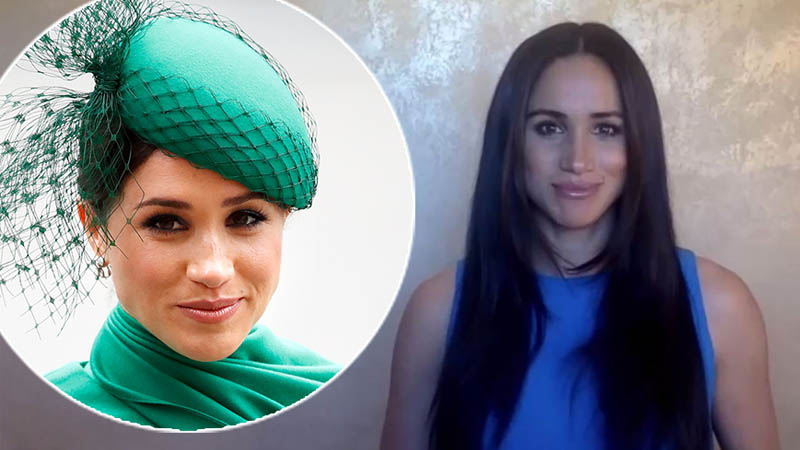 Her new long and luscious locks are a far cry from the sleek hairstyles of her senior royal days, but Meghan Markle is taking a subtle swipe at the Palace with her new do, according to a member of her inner circle.

Speaking to The Telegraph, Meghan’s former hairdresser and close friend George Northwood said that the Duchess of Sussex’s waist-length hair has a symbolic meaning behind it.

“She’s making a statement with hair that long – it represents strength and a sense that she’s really got everything sorted,” he explained.

“This straighter, longer hairstyle marks a new chapter in her life without such strict protocols.”

The new look is certainly a far cry from the slicked back look she sported during her final engagement as a senior royal on Commonwealth Day back in March.

George also explained that when he styles Meghan’s hair for events back when she was a working royal, they wanted Meghan to feel relaxed whilst still having that polished and smart look.

“We decided to create a more undone look to balance out the formal dress code, often including soft tendrils that ultimately became her signature messy bun,” he explained.

“Whereas now, she can take a more relaxed approach to how she dresses, therefore this sleeker blow-dried hairstyle works beautifully – it’s casual but still polished and appropriate for her new life.”

The celebrity hairdresser, who was responsible for Meghan’s wedding reception messy bun, also explained that the Duchess plans everything to a tee when it comes to even the most effortless hairstyles.

“We worked together for two years – and I hope to continue whenever she’s back in the UK – collaborating to create the effortlessly cool buns that she wears as well as the sleek, polished hair, such as her style at the British Fashion Awards in 2018 – my favourite look we’ve ever done,” George told Grazia.

“It’s funny, because her hair often looks so effortless but she’s actually the most thoughtful person, even down to the smallest detail like her jewellery.”

Duchess Meghan recently appeared via video link for The 19th* Represents virtual summit when she discussed her experience in the limelight.

She and husband Prince Harry along with their son Archie, one, moved into their new home in Montecito and the American-born royal confessed that she was glad to be back in the country and state she grew up in.

“It’s good to be home,” she remarked from her and Harry’s California mansion.

Gigi Hadid Shares a Rare Selfie Weeks Before Her Due Date