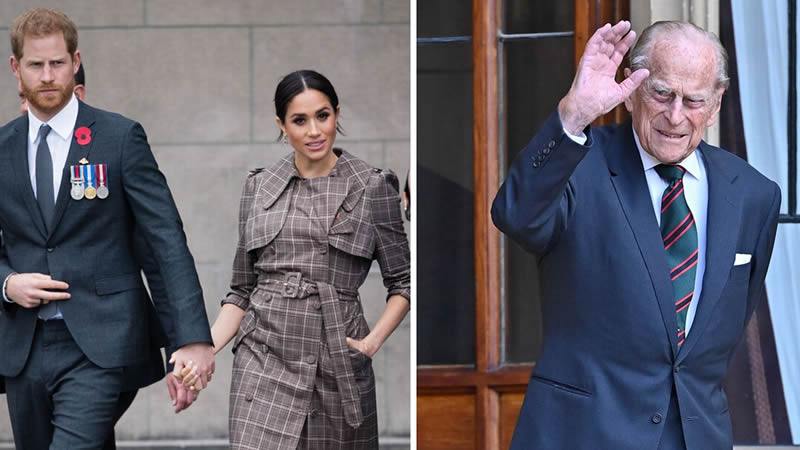 Prince Harry returned solo to the UK from America this week for the funeral of his grandpa following “high tensions” in the family. Meghan Markle doesn’t travel with her due to her heavy pregnancy doctor advise her to stay at home. The funeral will mark the first time Harry, has come face to face with his only brother, Prince William, in a year, however, Meghan Markle will not be by his side in this ‘’heavytension’’ she also says according to the source She would have put all the family tension aside to be there with Harry. “Harry wants to make sure Me and the baby are healthy and not involved in this‘’stressful situations.”

Meghan and Harry still are “still not on amazing terms with the family.” saying to the source. Prince Harry and Prince William are seen to gather first time in a year they have found very stress in themself but it’s also an occasion their beloved grandfather’s funeral.

It al broadcast live at 3:00 p.m. on BBC. This weekend on 17th April’s princess Philip’s coffin will lay to rest within the private chapel in Windsor Castle at 2:40 p.m. His funeral ceremony was confirmed and how many family members were invited was also confirmed. Prince Harry and Prince William will walk apart in Prince Philip’s funeral parade, and they will be separated by cousin Peter, son of Princess Anne, as they follow behind a Land Rover carrying the coffin to the service. Prince Charles will also be walking in the eight-minute parade, along with other Royals. it’s revealed by the source.

Members of the Royal Marines and air stations close to the Prince will act as weepers and members of the public have been asked to stay away due to the ongoing coronavirus restrictions. Prince Philip’s coffin will be transported to St George’s Chapel at the castle in a Land Rover which was designed with help of a person lay in a coffin.

The coffin will be received at the foot of the West Steps, and the national anthem will play as it enters the Horseshoe Cloister area. A party of Royal Marines will then carry the coffin up the steps, before pausing for the minute’s silence, the last silence for prince Philips, a silence of death.

Are Duke and Duchess of Cambridge Sill In Bad Terms With Sussexes?