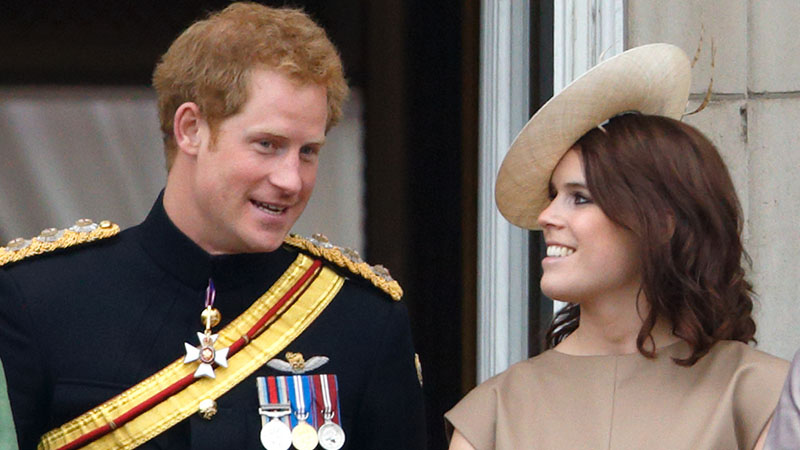 Ever since he and Meghan Markle stepped back as senior royals and especially after *that* interview with Oprah Winfrey, Prince Harry seems to be drifting further and further away from his family. That is, except for one.

Though he has six cousins on his royal side (as well as estranged brother Prince William), Harry appears to be closest with Princess Eugenie, the youngest daughter of Prince Andrew and Sarah Ferguson.

“Eugenie had always been more than just a cousin to Harry. They were also the closest of friends,” Omid Scobie and Carolyn Durand wrote in their biography Finding Freedom.

“Out of all the Queen’s grandchildren, Harry and Eugenie have one of the most natural connections. Like Harry, Eugenie is loyal, honest, and great fun. The two had many nights out together in London.”

Eugenie even set Harry up with his ex-girlfriend Cressida Bonas whom he dated for two years before Meghan.

“Harry had always confided in his cousin when it came to the women in his life,” the authors added.

“Not only did he trust her implicitly, but friends say that she gives great advice and has always been ‘beyond wise’ for her years.”

So when Harry started dating a certain American actress, they went on several double dates with Eugenie and her then-boyfriend Jack Brooksbank.

Meghan even confessed in the Oprah interview: “Eugenie and I had known each other before I had known Harry, so that was comfortable. We’re friends with them as a couple.”

It was also Eugenie’s mother Sarah who taught Meghan how to curtsy before she met the Queen at Windsor’s Royal Lodge.

“Right in front of the house we practised and ran in. Fergie ran out and said, ‘Do you know how to curtsy?’ Apparently, I did a very deep curtsy, I don’t remember it, and then we sat there, and we chatted,” the Duchess of Sussex recalled.

After Harry and Meghan stepped back from their roles as senior royals in what was dubbed ‘Megxit’, a source told Us Weekly: “Eugenie is really the only member of the royal family that Meghan is still close to.”

Another insider remarked: “They are sort of an unlikely pair, but remain in contact. They bond[ed] over their pregnancies.”

However when Harry and Meghan revealed the news that they were expecting their first child to the family, their decision to do so at Eugenie and Jack’s royal wedding in October 2018 ruffled some feathers.

“It did not go down particularly well with Eugenie, who, a source said, told friends she felt the couple should have waited to share the news,” the Finding Freedom authors wrote.

Some royal fans even suggested Harry and Meghan snubbed his cousin again when they announced their second pregnancy hot off the heels of the arrival of Eugenie and Jack’s first child, August.

That said, Eugenie has shared sweet messages dedicated to Harry and Meghan on her own Instagram account.

“Congratulations dear cousins.. we couldn’t be happier for you all,” she penned on her Instagram Stories shortly after news broke of their daughter Lilibet’s birth in June 2021.

Harry and Eugenie’s bond is so deep that Harry and Meghan allowed Eugenie and Jack to move into their UK residence, Frogmore Cottage in Windsor when they relocated to California.

“Frogmore Cottage continues to be the Duke and Duchess of Sussex’s residence in the UK, and they are delighted to be able to open up their home to Princess Eugenie and Jack as they start their own family,” a source told PEOPLE in November 2020.

Ahead of Harry’s arrival in the UK to unveil a statue of Princess Diana in honour of what would have been her 60th birthday, the redheaded royal is isolating at Frogmore Cottage with his cousin, Jack and baby August.

“Eugenie and Jack were handed the keys last year and told they could use it while Harry and Meghan were in America,” an insider told The Sun.

“The cottage is now literally split into two, meaning Harry can isolate in one half of the house without ever coming into contact with his cousin and her family. It has been set up for his return after last-minute plans seemed to work when he was back for the Duke of Edinburgh’s funeral in April.”

Whilst Harry has spoken openly about his clashes with brother Prince William and father Prince Charles, it seems his cousin could be one of the few members of The Firm he is still close with.

In fact, insiders suggested Meghan and Harry didn’t mention the Prince Andrew scandal in their Oprah interview out of “loyalty” to Eugenie and her sister Beatrice.

“We don’t know the reason, but one can only suspect that maybe out of respect for her, they didn’t want to go into her father,” royal author Anna Pasternak told Fox News after the interview aired.

No matter whether they’re royals or not, Harry and Eugenie have proved that they will always be family.

Reasons Why You Should Feel Proud to Be a Mother

Duchess Meghan to miss Prince Philip funeral: What pregnant women should know about traveling amid a pandemic