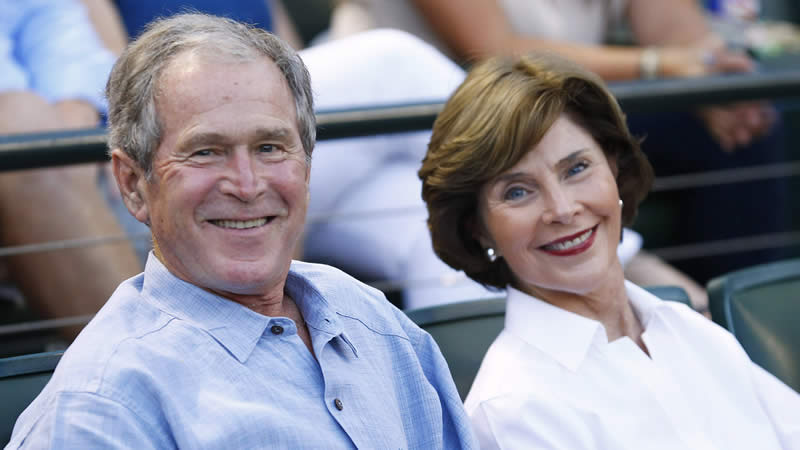 It’s hard to believe that a 44-year marriage could travel on a foundation of just three months of dating, but former president George W. Bush and Laura Bush have made it work.

He called marrying Laura one of the best decisions he’s ever made in a recent interview on his daughter’s show, Today with Hoda & Jenna.
Former President George W. Bush and former first lady Laura Bush opened up about dating just three months before getting married. he knew what he wanted right away: “I’m a decisive person.”

As the story goes, the pair met in 1977 at a friend’s barbecue. Their first date was at a miniature golf course, and they got married three months later. They were both 31.

“So you knew it right away?” Jenna Bush Hager asked her dad. “Yeah,” he said, assuredly. “You should’ve seen your mom. Those blue eyes, oh my god.”
The former president calls marrying Laura one of the best decisions he’s ever made. “I’ve done a lot of things in my life,” he told Jenna. “And your mom has enabled me to do so in many ways.”

They also admitted that neither of them loved disciplining Jenna and her twin sister Barbara throughout their childhood, but Hoda assured them that they did a great job.

“I can’t believe how well you did with Jenna,” she said. “She has a heart of gold. She makes me laugh. She makes me weep, and she’s caught onto this job so quickly.”

Still, Jenna was admittedly nervous to work with her parents close by. “Bring my parents to work day!!” she wrote under an Instagram photo of their interview. “I have to admit—I was a little nervous about mixing family and work. BUT I was so inspired by the day: witnessing incredible front-line doctors and nurses being sworn in as American citizens, introducing people I love to people I love, having the opportunity to talk about forgiveness and love over fear. ❤️🇺🇸”

Winston Marshall taking break from Mumford and Sons after backlash

This Is How Many Calories You Burn From Walking