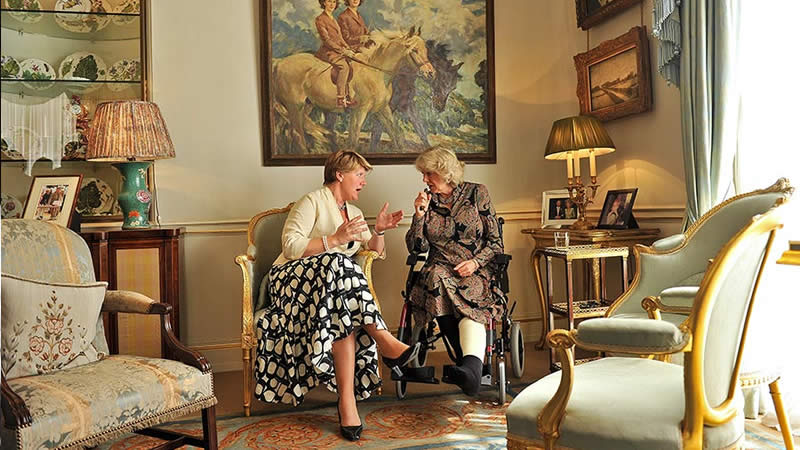 Camilla, Duchess of Cornwall, and Prince Charles have unveiled several areas of the homes they have been staying at since the pandemic began, and a recent appearance by Duchess Camilla showed a new office set-up.

She joined a virtual call with SafeLives, a charity working to cut domestic abuse, from the Morning Room at Clarence House.

Typically, the space has played host to several visitors over the years, but it seems that Charles and Camilla have converted it into a spot to work while they are unable to welcome guests in person.

Camilla sat at an oval-shaped oak desk with a glass top, where she had showcased a framed photo, a vase of pink tulips, a pen pot and a drinks tray. Perhaps the most notable point, though, is the position of the desk and chair in front of the large open log fireplace, as the cold spell in London continues.

Elsewhere in the room, Camilla and Charles have two alcoves at either side of the fireplace, displaying handpainted crockery and other trinkets. There is also plenty of light from various desk lamps.

The Prince of Wales previously posed for a photo in the same spot, where two floral armchairs had been set up at either side.

Duchess Camilla and Clare Balding in the Morning Room

The Duchess of Cornwall also hosted Clare Balding there in 2010, when she had a broken leg. It revealed the opposite side of the Morning Room, showing yet more armchairs, and a small side table holding a wedding photo of Charles and Camilla and a shot of a young Prince Harry.

Clarence House was once home to the Queen and the Duke of Edinburgh, as well as the Queen Mother, who lived there until her death in 2002.

Prince Charles carried out extensive renovation work before he moved in, but he did keep a selection of rooms just as they were when his grandmother occupied the home.