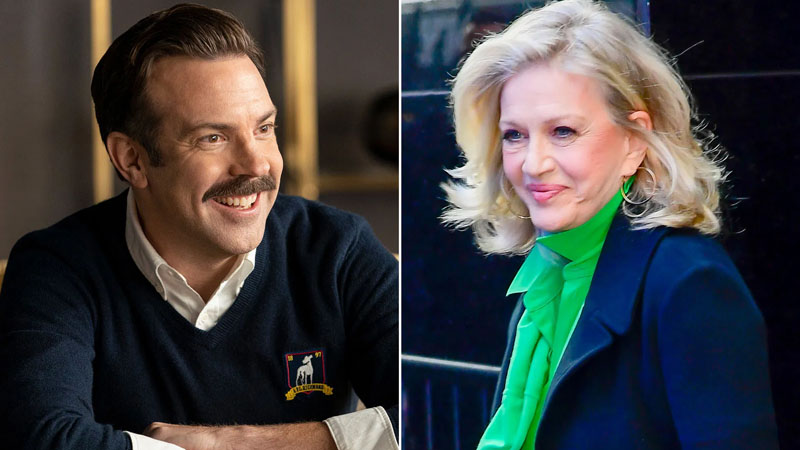 The broadcast journalist was called dropped by the show’s eponymous character, played by Jason Sudeikis, during the Season 2 premiere episode of the Apple TV+ comedy, which premiered on Friday.

Ted walks into his boss Rebecca’s office at one point in the episode.

Rebecca (Hannah Waddingham) asks Ted, “What do you say to a cocktail, Coach Lasso?”

Ted replies, “The same thing I’d say to Diane Sawyer if she ever asked me out on a date: yes, please.”

On Sunday, Sawyer, 75, responded to the shout-out on Twitter by writing alongside a clip of the scene;

The Twitter account “Ted Lasso” joined in the fun and replied to Sawyer. Though it’s unclear who runs the account, Ted’s funny response was exactly what he’d say.

The account tweeted, “Oh my… you’ve got me more on my heels than Lady Gaga at the Met Gala,” “Any chance you like biscuits?”

Sawyer has yet to reply.

For his work in the series, the 45-year-old actor won a SAG Award, a Golden Globe, and a Critics Choice Award – according to the source Toofab.

Ted Lasso is a comedy series, which is also co-developed by Sudeikis and executive producers. It is based on the story of an American college-level football coach Ted Lasso (Sudeikis), who is hired to manage an English Premier League football team.

It has won numerous awards, including a 2021 Peabody Award for “offering the perfect counter to the enduring prevalence of toxic masculinity, both on-screen and off, in a moment when the nation truly needs inspiring models of kindness,” per Entertainment Weekly.