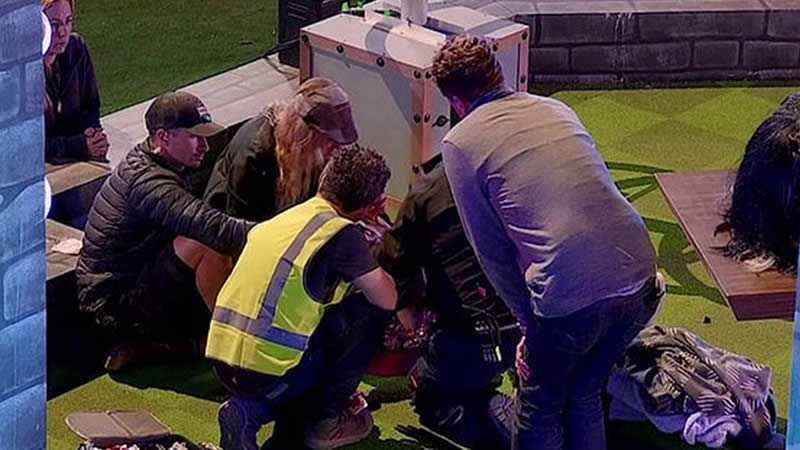 Speaking about the incident on Studio 10 at the time, the 72-year-old confessed she’d embarrassingly had a tumble while on the job and, as a result, fractured her shoulder.

“I wasn’t playing silly buggers. It was 3.30 in the morning and a segment I was doing shouldn’t have even been considered,” Denise told the breakfast program.

“I did it, and I shouldn’t have. I’ve learned a terrible lesson to learn at my age, but it has changed my thinking – again,” she added, while sharing a selfie taken from her hospital bed.

While the funny lady admitted she was working when the incident occurred, she gave little information about what happened in the lead up to her tumble.

But on Sunday, fans who tuned in to Channel 7’s reality golfing show Holey Moley witnessed the TV star make a surprise appearance as a competitor, before taking a brutal fall mid-show.

For those who haven’t tuned in to the family friendly reality show, the premise is pretty simple: celebrities take turns battling it out in an over-the-top putt putt course.

The fall in question took place while Denise was competing against ex-Olympic speed skater Steven Bradbury during a Frankenstein-themed challenge called “Frankenputt.”

As part of the wacky challenge, contestants were seemingly zapped by an “electric shock machine”, which was being controlled by an “evil gopher” wearing a lab coat.

When the 72-year-old missed one of her shots, she chased after the costumed character, shouting: “Give us your little furry hand!” before tripping and falling to the floor.

Fans were shocked to see the beloved TV star hit the ground so hard, and immediately afterwards, she was seen writing around on the floor, while clutching her arm.

“That doesn’t look good at all,” commentator Matt Shirvington told viewers at home, before the production crew and medics rushed to the TV star’s aid.

“Oh, I’ve done my shoulder,” Denise gasped, before adding: “Oh that hurt like hell. Oh my god… where do we go from here?”

But within minutes, it was revealed the Gold Logie-winning television presenter’s time on the show had come to a premature end and she was escorted off-set in a wheelchair, with her arm in a sling.

Despite the fall, Denise remained upbeat and even laughed off the incident right up until the very end, saying: “Ahh, I’m in a sling. Bloody gopher!… Steven, I’m out!”