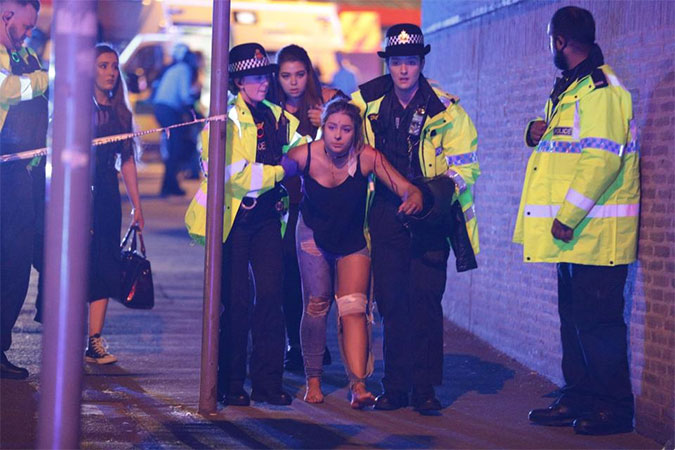 Fans have been evacuated from the Manchester Arena following an explosion, which are now being investigated by local authorities. The bomb went off in the box office area of the venue minutes after Ariana’s concert had ended. Ariana Grande publicist has confirmed the singer is OK, but fans at the show have taken to Twitter to reveal the bomb blast led to mass panic inside the venue and concertgoers began running outside. Fans have posted video from inside the venue and others are reporting smoke, blood and even bodies.

One devotee tweeted: “I was inside Ariana Grande concert in Manchester Arena. Right at the end a (sic) explosion was heard. Smoke on the corridors and blood”, while another added, “There has been a bomb near the Manchester arena. I’ve seen bodies everywhere. Please everyone let your family know you’re safe.” Another concertgoer, 22-year-old Majid Khan, told The Independent fans were exiting the venue at about 10.40pm local time when a “huge bomb-like bang went off”. He added, “It was one bang and essentially everyone from the other side of the arena where the bang was heard from suddenly came running towards us (sic)… Everyone was just running to any exit they could find as quickly as they could.”

A statement from Greater Manchester Police reads: “There are a number of confirmed fatalities and others injured. Police are telling everyone to avoid the area so first responders can work.” New video footage of the aftermath following the bomb blast shows people fleeing from the venue in tears. One fan tells Mail Online, “Suddenly everybody started screaming and running for the exit… We could hear the police and ambulance sirens. It was terrifying. There were thousands of people trying to get out at once. They were all screaming and crying. The whole place smelt smokey and burnt.” Early reports suggest as many as 19 people were killed in the blast and over 50 were injured.

Several of Ariana’s peers shared their thoughts as news of the tragedy spread. “Praying for everyone at @ArianaGrande’s show,” Katy Perry posted on Twitter. “Tearing up imagining innocent concert goers losing their lives… praying for everyone and all #arianators,” Demi Lovato tweeted. Cher and Ellie Goulding also took to the social media platform to express their despair over the frightening event. “MY PRAYERS GO OUT TO PPL (people) OF MANCHESTER… HAD SPECIAL TIMES THERE FROM YOUTH & BEYOND,” Cher posted, while Goulding added: “Sending love to those affected in Manchester.”