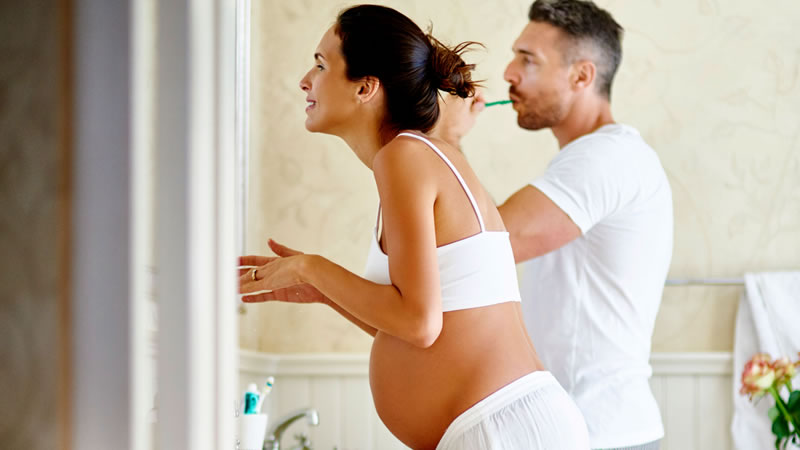 A woman’s pregnancy is a wonderfully exciting time, full of changes to both one’s life and body. These are the most unexpected beauty surprises that come along with being pregnant.

Why pregnancy affects hair and skin so dramatically

“During pregnancy, a woman’s body experiences very sudden and dramatic changes as a result of the increase in the hormones estrogen and progesterone,” says Dendy Engelman, MD, of Manhattan Dermatology and Cosmetic Surgery. One of those is that glorious (though far from universal) pregnancy glow, which might have you sporting an extra bounce in your step. But there are some less-appealing changes too.

“Most moms-to-be expect the signs of pregnancy they’ve heard before like bigger breasts and fatigue, but are totally in the dark when it comes to the other symptoms that can wreak havoc on—or work wonders for—their appearance,” says Joel Schlessinger, MD, board certified dermatologist and RealSelf advisor. Here’s the scoop on the pretty and not-so-pretty perks of being preggo and what you can expect to experience in terms of pregnancy skin care while baby’s cooking. You can safely ignore these pregnancy myths.

Hurray! You may notice that your hair looks fuller and shinier than it did pre-pregnancy. “This is again thanks to your pregnancy hormones, which slow down the rate of hair loss, making your locks seem thicker and more voluminous,” says Dr. Engelman. As much as 95 percent of your hair can be growing during pregnancy, but then after delivery, you can expect much of that hair to shed.

“Once your hormones return to normal, there’s a shedding process of everything your body worked so hard to build up during pregnancy—hair growth included,” says Engelman. Try a dietary supplement that contains biotin, vitamin C and a blend of amino acids to help your hair become stronger, healthier, and more vibrant.

The flip side to long, lustrous hair: when it grows in unwanted places, like your abdomen, face, nipples and (yep!) even your backside. But don’t make a waxing appointment (if you can stand it) just yet—this extra hair growth is only temporary and should ease up around six months postpartum.

“It’s completely safe to wax, shave, or use electrolysis during pregnancy, so at least you have some options if the hairiness is getting to you,” says Dr. Engelman. Read about the truths no one tells you about giving birth.

Dark spots on your face

Commonly referred to as the “pregnancy mask,” melasma is characterized by dark, blotchy patches of skin on the forehead, upper lip and cheeks. “This condition appears when an increase in estrogen levels stimulate excess melanin production and affects as many as 75 percent of pregnant women,” says Dr. Schlessinger. “It’s especially common in those with darker skin tones, or those of African and Asian descent.”

Because many skin-lightening ingredients aren’t recommended for use while pregnant or breastfeeding, there isn’t much you can do to address this condition while expecting. Although there’s no way to completely prevent melasma, wearing sunscreen can help limit the effects, as UV exposure can make unwanted pigmentation even worse. The good news is that this discoloration is often temporary and fades after delivery.

A weird line down the middle of your belly

Also called the “pregnancy line,” this dark vertical strip, which affects approximately 75 percent of pregnant women, extends from your belly button to your pubic area. The same hormones that trigger melasma are responsible for this change. “When melanin production increases during pregnancy, the skin in this area darkens, usually during the second trimester,” says Dr. Schlessinger. “If it doesn’t fade completely, you can use a skin-lightening cream with hydroquinone once you’re no longer pregnant or breastfeeding.” Though there’s no easy way to prevent this pigment change, wearing sunscreen can help it from getting worse.

You can thank raging pregnancy hormones and that expanding belly for putting increased pressure on your veins and causing blood vessels to enlarge. This leaves red spider-like marks known as varicose veins or spider angiomas on your legs, arms, torso, or even on your face, that can worsen depending on your level of movement.

“If you’re standing for long periods of time, you may notice more spider veins crop up, so it’s best to set aside time to sit with your legs elevated,” says Dr. Engelman. “While there isn’t a treatment for spider veins during pregnancy, you can use concealer to camouflage the imperfections or have your derm zap them with a laser post-pregnancy.” Every new mom has to memorize these brutal truths.

Unfortunately for some, the influx of hormones can cause the skin to produce more oil, which can lead to clogged pores and acne breakouts. “Some women experience acne as early as their first month of pregnancy and it can continue to be an issue even after delivery,” says Dr. Schlessinger. The best way to promote clear skin no matter what stage of pregnancy you’re in is to maintain a good skincare routine.

“Clean your skin twice a day and use products that are oil-free, noncomedogenic (doesn’t block pores) and non-acnegenic,” he says. “And steer clear of common acne-fighting ingredients like benzoyl peroxide and salicylic acid until you’re no longer pregnant or breastfeeding.” The same goes for prescription meds like Accutane, Retin-A and tetracycline, which are unsafe to use during pregnancy. “If acne is a major concern for you while expecting, ask your physician about pregnancy-safe treatment options.”

Rosy cheeks may sound appealing, but not when they’re in the form of inflammation caused by swelling of blood vessels close to the skin’s surface. “The exact cause of rosacea is unknown, but it’s believed to be a result of a combination of hereditary and environmental factors,” says Dr. Engelman. “Some people have the condition but don’t know it’s rosacea, or there was never a flare-up.” It can be triggered by a number of factors such as hot foods or beverages, spice, alcohol, extreme hot or cold temperatures, sunlight, stress, exercise and hot baths or saunas.

“A woman’s body goes through a lot during childbirth, so it’s possible that the stress from labor can cause flare-ups,” she says. Doctors treat the condition with a variety of topical and oral medications or laser therapy, so get advise on what’s safe for you during pregnancy.

If you suddenly see extra bits of skin hanging off your body, don’t freak out. Pregnancy hormones can also increase skin cell production and cause small polyps to form anywhere your skin rubs against your clothing. “They’re harmless and after delivery your dermatologist can remove them easily,” says Dr. Engelman.

These line-shaped lesions affect 50 percent to 90 percent of all women—pregnant or not—but are much more common during pregnancy, when a woman’s body is expanding faster than the skin is able to keep up.

“These marks may appear red, brown, or purple in color, and are visible predominantly on the belly, breasts and thighs,” says Dr. Schlessinger. Due to genetics, some people may be more prone to stretch marks than others. Try these dermatologist-approved ways for getting rid of stretch marks.

5 Skincare Tips Before and After Workouts