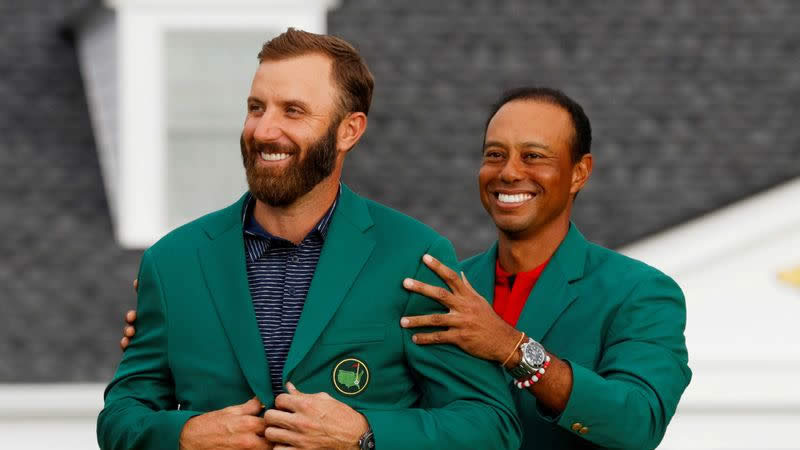 AUGUSTA, Ga. (Reuters) – Tiger Woods had Georgia on his mind on Tuesday, tweeting he was going to miss the traditional Master’s Champions Dinner hosted this year at Augusta National by Dustin Johnson.

“I’ll miss running up @DJohnsonPGA’s bill at the Champions Dinner tonight. It’s still one of my favorite nights of the year,” said Woods on his official Twitter account.

Woods will not only miss Tuesday’s Champions Dinner but the year’s first major as well as he recovers from serious leg injuries sustained in a single-car crash in February near Los Angeles.

A five-time Masters champion, Woods is currently recuperating at home after surgery on a fractured right leg and shattered ankle.

As the 2020 winner of the Green Jacket Johnson gets to choose the menu for the Champions Dinner and decided on Pigs in a Blanket and lobster and corn fritters as appetizers, house salad or Caesar salad and a main course of Filet Mignon and miso-marinated sea bass. Desert will be peach cobbler and apple pie with vanilla ice cream.

While Woods lamented missing the dinner, his fellow champions said the feeling was mutual.

“Thinking of my guy @tigerwoods during this week @themasters. I’ll miss you tonight at dinner. Not the same without you,” tweeted the 1992 winner Fred Couples.

Ben Affleck Says Ex J.Lo Looks ‘The Same As You Did In 2003’ In Flirty Interview