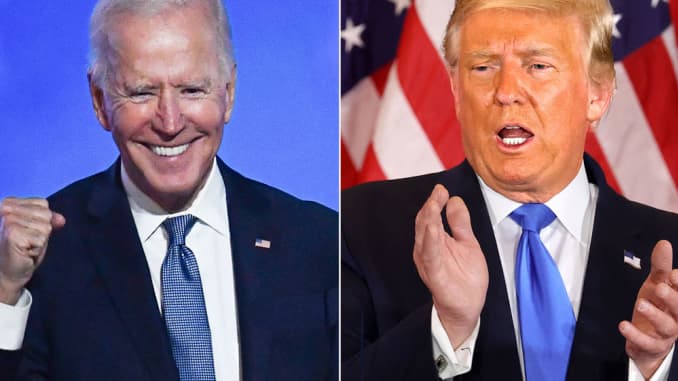 It’s what you do behind closed doors that matters.

But your true character shows when no one is watching.

It is one of strength, honesty, integrity, and humility.

President Trump has finally revealed what he wrote in that private letter to Joe Biden.

The contents are usually kept private.

The letter is left in the Oval Office for the new president.

Many liberals and Democrats thought that Trump probably wrote something snarky or mean.

But it turns out that President Trump wrote something “from the heart” to Biden.

Because President Trump truly loves America… and he wants America to succeed!

Former President Donald Trump revealed what he wrote to President Joe Biden when he left office in January.

“Basically I wished him luck and, you know, it was a couple of pages long and it was from the heart because I want to see him do well,” Trump said during a podcast interview on Monday with Lisa Boothe, describing the letter he left for Biden.

The former commander-in-chief added: “I want him to do well, but that doesn’t include closing up the Keystone Pipeline, which by the way environmentally is much better than having [crude oil] on trains. But [Biden’s] friend and supporter Warren Buffett has trains. Nobody ever talks about that.”

Biden never made reference to the contents of the letter during interviews in January but said it was “very generous.”

In recent years, outgoing presidents have left a letter to their successors. Usually, they leave a note on the Resolute Desk, which was given to the United States by Queen Victoria in the 19th century.

Former President Ronald Reagan started the tradition when he left a note for Vice President George H.W. Bush, who succeeded him in the presidency.

Former President Barack Obama left a note to Trump, reading in part: “This is a unique office, without a clear blueprint for success, so I don’t know that any advice from me will be particularly helpful … American leadership in this world really is indispensable. It’s up to us, through action and example, to sustain the international order that’s expanded steadily since the end of the Cold War, and upon which our own wealth and safety depend.”

And before that, former President George W. Bush left a letter to his successor, Obama: “Very few have had the honor of knowing the responsibility you now feel. Very few know the excitement of the moment and the challenges you will face … There will be trying moments. The critics will rage. Your ‘friends’ will disappoint you. But, you will have an Almighty God to comfort you, a family who loves you, and a country that is pulling for you, including me. No matter what comes, you will be inspired by the character and compassion of the people you now lead.”

This is yet another piece of evidence that the media caricature of President Trump is wrong.

They portray him as ruthless, selfish, and egotistical.

But the reality is that he is extremely personable.

And he even wished Joe Biden the best of luck.

Of course, Trump will always speak his mind.

He may wish Biden well…

But if Biden is making foolish decisions, that does not mean that President Trump has to agree with them.

The Daily Mail reports that President Trump continues to issue stark warnings to Biden, despite the friendly letter that he left behind:

Donald Trump said he left a ‘couple page’ letter for President Joe Biden in the Oval Office on Inauguration Day written ‘the heart,’ as he bashed his successor’s policies on the border.

‘Basically I wish him luck,’ he said in an interview with Lisa Boothe for her podcast.

It’s a tradition for an outgoing president to leave a letter for his successor but there were questions as to whether Trump would do so, given the contentious election between him and Biden.

But there was a letter waiting for Biden on the Resolute Desk when he entered the Oval Office on January 20th.

‘The president wrote a very generous letter,’ Biden said at the time. ‘Because it was private, I won’t talk about it until I talk to him. But it was generous.’

Trump said it was a ‘couple of pages long and it was from the heart because I want to see him do well.’

He declined to say specifically what he wrote. Biden has said he would not reveal the letter’s content until he talked with Trump but it’s unclear when it was the two men [last spoke. It’s believed to have been the last presidential debate in October 2020.

‘I don’t want to say,’ Trump said when Boothe asked him what he wrote. ‘That’s, you know, perhaps up to him and I guess he said he wouldn’t do it without my approval.’

The letter will eventually become public – all notes outgoing presidents leave for their successors become archived under The Presidential Records Act and go to the National Archives and Records Administration.

In the nearly 60 minute podcast interview, Trump reiterated many of his old complaints: his false claim he won the 2020 election, that he was a victim of a ‘witch hunt’ from special counsel Robert Mueller, and complaining about Republicans – including his own Vice President Mike Pence – who did not support his effort to illegally overturn the election result.

‘Look he’s there. It was a rigged election election, you know, I would never concede,’ the former president said.

Even as Trump said he wished Biden well, he slammed his successor for his policies on immigration and not finishing the border wall.

Trump said his advice to Biden on the border was to ‘finish the wall.’ And he claimed his long-promised border wall ‘is just about finished.’

‘You could finish it in a month,’ he said.

On the 1,954 mile U.S.-Mexico border, the Trump administration built 452 miles of wall, according to US Customs and Border Protection (CBP) information.

But only 80 miles of new wall had been built. The vast majority of what the Trump administration built replaced already existing barriers built in previous administrations.

Trump also repeated his charge ‘dangerous criminals’ are coming through the border.

‘You have some really bad ones coming, really dangerous criminals coming up, and we’re allowing them to come right into our country. It’s insane. And it’s nothing compared to what it’s going to be over the coming months,’ he said.

Trump’s criticism comes as the Biden administration struggles to deal with the situation at the border.

The number of unaccompanied migrant children in US custody surpassed 15,000 as of Saturday. Nearly 1,000 children have reportedly been held by agents for more than 10 days.

New photos obtained by Axios show the children living in crowded conditions, many of them sleeping on the floor.

Biden has faced criticism from Republicans for reversing some of Trump’s hardline policies, which they argue has led to increased numbers of migrants arriving at the border.

Biden said during his campaign that he would implement ‘more humane’ border policies, which some have taken as a telegraph that it will be easier to cross.

Biden’s administration is wrestling with a growing humanitarian crisis at the border, where the spike in the number of migrants fleeing violence, natural disasters and economic hardship in Central America is testing the Democratic president’s commitment to a more humane immigration policy.

The US government has also ramped up ‘more aggressive’ messaging – in English and Spanish – to persuade migrants to not to come to the United States.

‘I think we are executing on our plans and, quite frankly, when we are finished doing so, the American public will look back on this and say we secured our border and we upheld our values and our principles as a nation,’ he added.

Remember, the crisis at the border has only gotten worse since Biden got into office.

And don’t ever forget…

Biden hasn’t done ANYTHING regarding COVID-19.

It was the Trump administration that funded and created Operation Warp speed.

Thanks to President Trump (not Biden) the light finally appears to be coming at the end of the tunnel.

President Trump Takes Aim At Mitch McConnell, And Reveals Future of The GOP