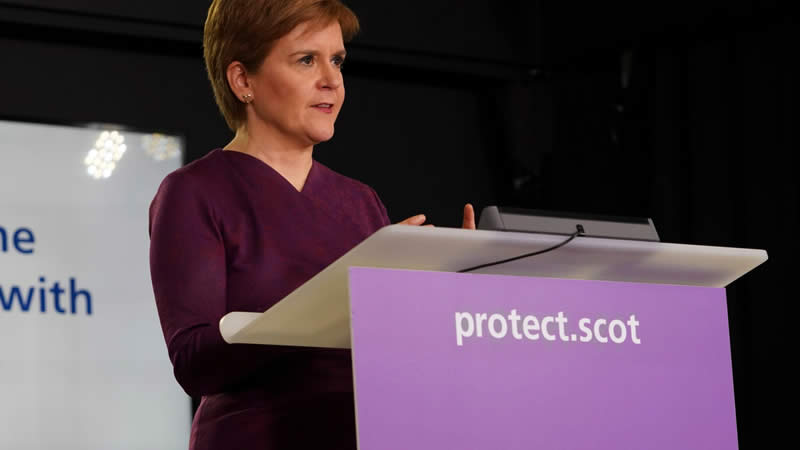 Nicola Sturgeon is preparing to unveil details of Scotland’s path out of lockdown.

The return of face-to-face education, sports activities for young people and “limited” social interaction for adults will be among the priorities.It will begin with easing current level four restrictions before moving back into a geographically variable system.

The first minister has said all decisions will be “driven by data rather than dates”.She wants the country’s gradual emergence from lockdown to be “phased and sustainable”, with at least three weeks between each phase. Is vaccination slowing Scotland’s Covid death rate?
Covid deaths falling as vaccine ‘having an effect’
It comes a day after Scotland’s youngest children returned to the classroom for the first time this year, though most pupils continue with home schooling.

And it follows Boris Johnson’s announcement that shops, hairdressers, gyms and outdoor hospitality in England would reopen on 12 April if strict conditions were met as part of a four-step plan to ease lockdown.

What will determine the exit from lockdown?

The Scottish government has said its priority is still the suppression of the virus to the “lowest possible level”.The speed at which the changes happen will be largely dictated by Covid rates across the country and the impact that is having on the NHS.

How quickly the country is vaccinated will also be a big factor in the changes to lockdown restrictions.The latest statistics show that more than 1.4m have now had their first jab, and the it is now being offered to people with underlying health conditions, and unpaid carers.

Research published on Monday has already revealed the vaccination programme is having a “spectacular” impact on preventing serious illness.And last week data appeared to show the Covid death rate is falling in older people’s care homes – where all residents have now received their first dose.

Ms Sturgeon said: “We know we cannot continue in lockdown indefinitely and we must plan a gradual phased return to as much normality as possible.”We hope that more children will be able to return to school later in March. And we have published new guidance to enable an easing of restrictions on care home visiting from early March.

“Beyond that, giving people the ability to meet loved ones, initially outdoors, is a priority for easing restrictions within the current level four.”Ms Sturgeon said the aim was to move Scotland back to a levels system, which would also see the economy gradually reopen.

At Monday’s government coronavirus briefing, she said she expected Scotland’s route of lockdown would have “broad similarities” with England but it would not be identical.

UK Health Secretary Matt Hancock told the BBC’s Good Morning Scotland programme that the UK would have to learn to live with coronavirus for some time rather than pursue an elimination strategy to rid the country of it completely.

He said such a policy was “not possible” for an “open trading nation” such as the UK, as the strategy did not work without entirely closing off borders.Instead, he said, the UK’s plan was to replace lockdown measures with protection from the vaccine.

“It’s because of this incredibly successful vaccine rollout across Scotland and right across the country that we are all… able to take appropriate steps out of lockdown and keep this virus under control.”

The country’s business sector is hoping the first minister’s announcement will give them a sign of when they can possibly return to normal.The Scottish Hospitality Group, which represents a number of big bar and restaurant operators, has called for a similar announcement to the UK government’s indicative dates for hospitality reopening.

The prime minister hopes to see indoor hospitality and hotels reopen on 17 May and all legal limits on social contact lifted on 21 June at the earliest.A SHG spokesman said: “We desperately want to see Nicola Sturgeon confirm similar plans for Scotland in her statement, and allow us to be a part of that.

“Anything less would be an incredible betrayal of those people whose livelihoods have been under threat for so long.”Meanwhile Tracy Black, the director of the CBI in Scotland, told BBC Scotland’s The Nine that businesses wanted certainty.

“We think the first minister will be more cautious [than in England],” she said.

“It’s so important to be be able to plan and work with staff so they know when they will come back to work. We need to see support continues if restrictions are in place – we don’t want any cliff edges this year.”