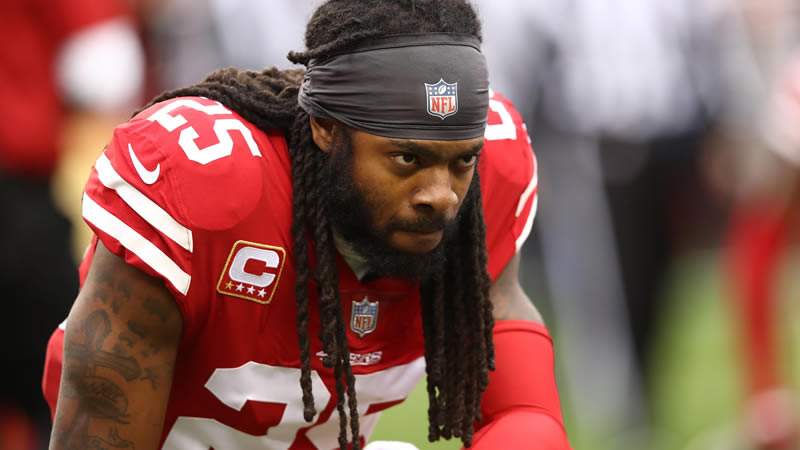 Coming off of a season in which he was limited to five games due to injury, former Seattle Seahawks and San Francisco 49ers star Richard Sherman has not yet landed with a new team. He thinks he may be waiting for a few more weeks at least.

Sherman, a Pro Bowler in 2019, recorded 18 tackles and one interception for the 49ers in 2020. Overall, he played quite well for the franchise, after coming over from the Seahawks, and bouncing back from a 2017 ruptured Achilles that ultimately ended his time with that franchise.

At 33, he’s getting up there for top-level cornerbacks, but he should still be able to contribute to an NFL team. A few weeks ago, he admitted things were moving in “slow motion,” and that he hoped the Shaq Griffin to Jacksonville and William Jackson to Washington deals would lead to more interest from teams. Now, he thinks he may be waiting until after the NFL Draft.

“Well, apparently we got to wait ’til the draft happens before anything else shakes out, because everybody has their hopes and dreams in the draft, which is understandable,” he said on a recent episode of The Cris Collinsworth Podcast featuring Richard Sherman.

“You turn 33, and then it’s like, ‘We’ll wait until we get a young pup; and if we can’t get a young pup, we’ll take an old fool,’” Sherman continued, via NBC Sports Bay Area. “So that’s where we’re sitting.”

One has to imagine that a team will see the value in bringing in a veteran with a championship background like Richard Sherman, even if it is as a third cornerback or a situational player. He isn’t that far removed from being a very productive cornerback. It does make sense that teams with needs there will see what the draft has in store first.

No, Zayn Malik and Gigi Hadid are not married: Ingrid Michaelson apologises