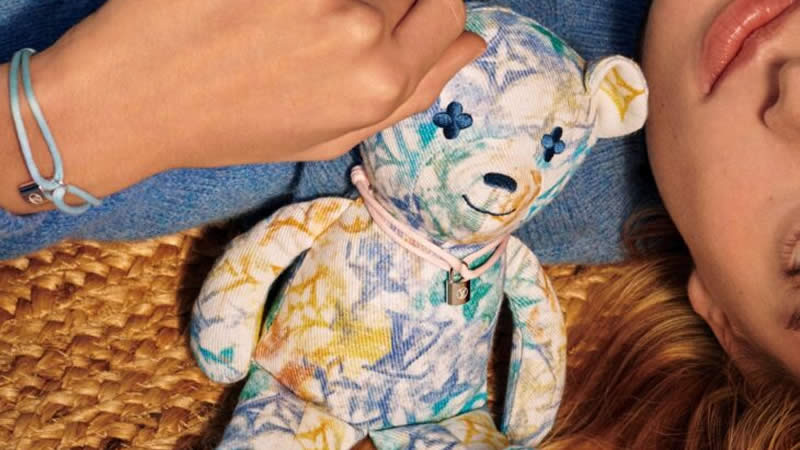 Louis Vuitton will support Unicef for a sixth year through sales of the Lockit bracelet and new limited-edition teddy.

Louis Vuitton has unveiled its 2021 Silver Lockit bracelets as part of its continued partnership with Unicef to raise funds for the world’s most vulnerable children.

The new Louis Vuitton for Unicef Silver Lockit bracelets, which are crafted from recycled silver and organic cotton, come in black as well as three springtime hues: pastel blue, pink and celadon green. Each bracelet features the brand’s iconic padlock, inspired by the tumbler lock created by Georges Vuitton in 1890 to keep his clients’ most precious possessions safe. It was chosen as a symbol for Louis Vuitton’s partnership with Unicef to represent the sealing of a promise to help children at risk.

Doudou Louis is priced at $955, $200 of which is donated to Unicef, and the Silver Lockit bracelets are priced at $465 each, $100 of which is donated to Unicef. The funds raised will go toward providing access to water, sanitation, nutrition, education, health and protection services to vulnerable children living with the impact of conflict, natural disasters and other situations that threaten their safety and well-being. This also includes support of Unicef’s essential Covid-19 emergency response efforts.

The French fashion house has been working with Unicef since 2016 to support the most vulnerable children around the world. Since the launch of the Silver Lockit five years ago, the partnership, called the #makeapromise campaign, has raised nearly $13m to aid the charity’s work.

5 Ways to Upgrade Your Everyday Jeans