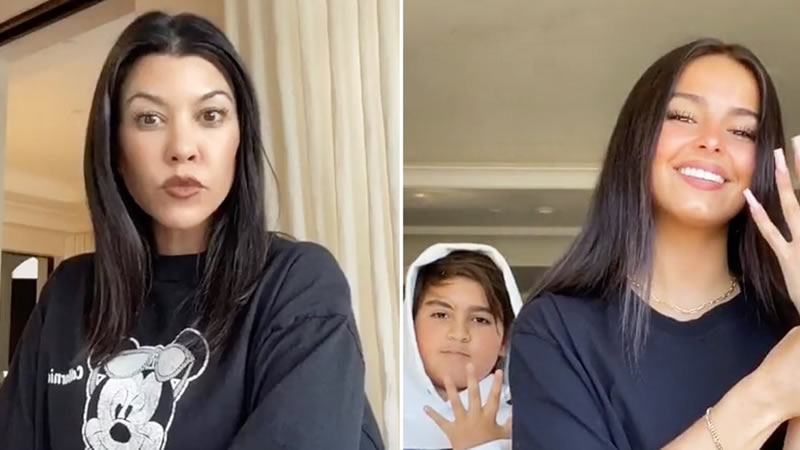 It is a cause of concern for the Kardashian family when it sees Kourtney Kardashian extraordinarily happy while in the company of 20-year-old TikTok star Addison Rae. So, it is time for them to throw some straightforward questions at the famous TikToker about her blossoming relationship with the Kardashian family member.

In a new sneak peek clip for Thursday’s episode of Keeping Up With the Kardashians, the family is seen grilling the TikToker.

“We all decided to get to the bottom of Kourtney and Addison,” Khloe Kardashian announced. “So we invited Addison over for lunch but without Kourtney because we just wanted to ask some more questions and get to know her more.”

Scott Disick, Kourtney’s ex and the father of her three children, her mom, Kris Jenner, and her sisters, Kendall Jenner, Kim Kardashian, and Khloe are seen sitting at the lunch. And, they start grilling Addison Rae.

Khloe says in a rather direct manner, “”What do you do to Kourtney to make her so happy?” Then, Kim Kardashian says, “Honestly, at the beginning we were like, ‘Wait… are they…”

“I’m still thinking that,” Scott admits. “Hooking up,” Kim completes her sentence, “If it was that kind of relationship.” “That was the elephant in the room,” Scott agrees.

But, shocked Addison laughs and denies that they are “hooking up.” “It’s OK if you are. Nobody judges,” Scott says to her.

The previous trailer for this week’s episode shows Kourtney’s 11-year-old son Mason telling the famly that Addison sleeps over a lot in Kourtney’s room. Addison herself also told the media about her friendship with Kourtney.

“Kourtney and I just happen to have a great friendship, which is really fun,” she had told ET last September. “She’s been a great person to have in my life.”

Keeping Up With the Kardashians airs Thursdays at 8 p.m. ET on E!