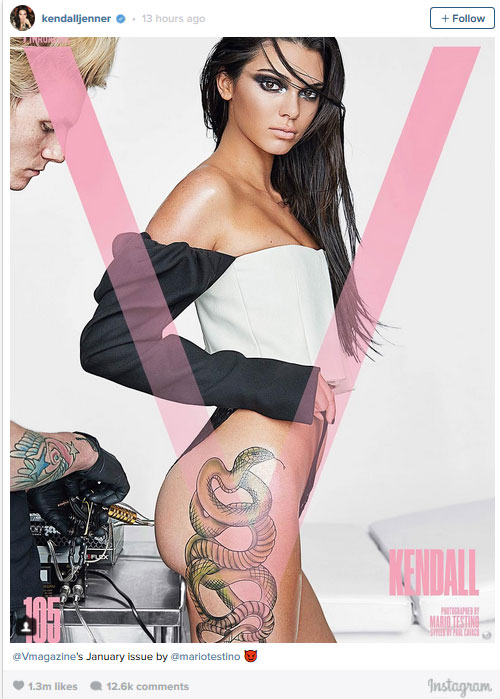 Kendall Jenner was shot by famous fashion photographer Mario Testino for the edgy shoot. She posed in high-leg pants while a tattooist appeared to touch up the fake ink. The 21 year old wore an off-shoulder monochrome top. She wore her dark hair long and wet. Her eyes were lined by black and silver smokey eye makeup. She covered up slightly with a floral jacket, as she posed beside her sister at a party. It didn’t look like Kylie Jenner was too fussed about her sister’s revealing outfit, smiling widely for the black and white photo. She captioned the shot simply with an emoji and tagged photographer Moises Arias, sending her 71.4million followers into meltdown.

Fans rushed to praise the snap, with one writing: “That piercing though.” “Fudge! Why so pretty guys,” another commented. A third said: “Nippleeeessss.” Kendall has always been upfront about her love for her body. Speaking about her first ever catwalk, Gigi Hadid best friend admitted she was “excited” about her boobs being on show. She told W Magazine: “My biggest concern was definitely falling.  “And then my t**s were out. nervous about that. I was really excited about my t**s being out, actually. When asked why, she added: “I don’t know. I’m weird. I love my t**s being out. It’s like one of my things, I guess.”

20 Benefits of Having a Boyfriend For a Best Friend