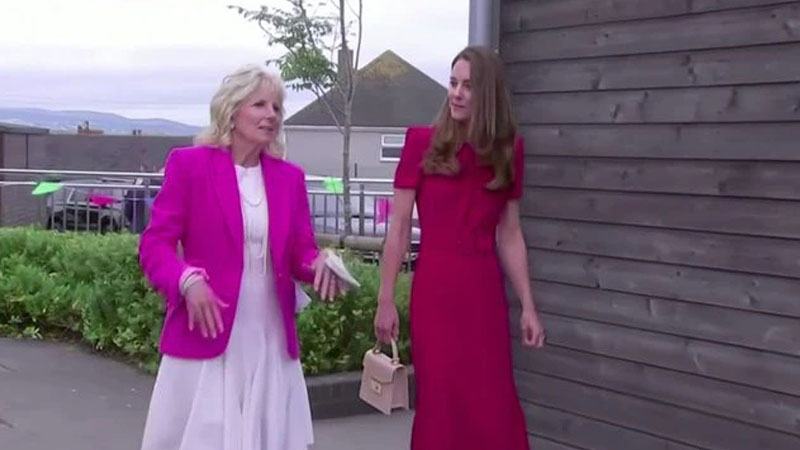 Last weekend royal family visit with President Joe Biden and First Lady Dr. Jill Biden. There Kate was observed talking to First Lady Jill bonding on important topics such as children and education. They seem together, enjoying and chatting and the media made sure to cover every moment of their scheduled events.

But between Kate’s venture with Jill and the recent G7 summit, we’re noticing a different trend of taking interest in politics. None of whoever gets the same criticism as supposedly “political” ex-royal Meghan Markle. Meghan’s Vogue cover back in 2019 has got more attention than Kate’s political interest. It’s no less indicative of where that generation of the royal family stands when it comes to U.S. politics.

Kate is a senior member of the royal family makes her a public figure: so, meeting with politicians comes with the job description. And while Kate has met with all three most recent US presidents — former president Donald Trump, President Biden, and former President Barack Obama — it’s evident that Kate spent more time with the Obamas and we remember the photo of Prince George in his bathrobe greeting Barack Obama and the Bidens. She and her husband are trying hard to do their best to avoid the hullabaloo of the last management — and that is a political decision.

The sheknows.com wrote, ‘while Kate has faced virtually no commentary on her clear preference for partnering up with Jill Biden as opposed to Melania Trump, her one-time counterpart Meghan Markle was not afforded the same grace when she guest-edited a 2019 Vogue UK cover that highlighted 15 women of color who acted as forces of change in the world. This was an inexcusably political position — at least if you asked Piers Morgan.’

At the time, Meghan was criticized by Morgan for bringing “PC-crazed” politics to the magazine. “Being a royal means you stay out of politics,” he wrote in his Daily Mail column in July 2019. “Yet here is Meghan being about as political as any royal has ever been.” Has he said anything about Kate and the time spent with any politician? Crickets. And remember that Meghan

participated in the Vogue issue when she was in a senior royal role, so those standards of criticism from Morgan should apply across the board. Meghan made efforts to raising awareness of the causes she cares about, whether it is issues of racism or pays equality — and it always seems to cause a stir.

But we sense that if Kate does such things, she will be praised for her work, suggesting that it’s not really Meghan’s political involvement that gets people so riled up after all. People called on the Duchess of Sussex to lose her title when she encouraged people to register to vote in the most recent US election, for example (she never told people who to vote for), but again: Kate has shown lots of partiality for the Bidens’ policies than the Trumps’, and we’re not hearing a peep about it. Once the pattern becomes so clear, it just starts to feel personal.

While defining what political power a member of the British royal family can or should have is by no means a simple question, we can’t help but sympathize with Kate’s desire to indicate support for the policies of the Biden administration over those of the Trump administration, however subtly she felt empowered to do so. Similarly, we’ve always admired Meghan’s commitment to raising awareness for the causes she cares about, particularly when they’re causes like fighting racism or expanding voting rights.

But these women’s disparate abilities to involve themselves in politics without public backlash are yet another example of the double standard to which Meghan is held, and we’d like to dispel once and for all with the myth that she was just too “political” to be a royal.

The Never-Ending Relationship Between Women and Growing Fashion