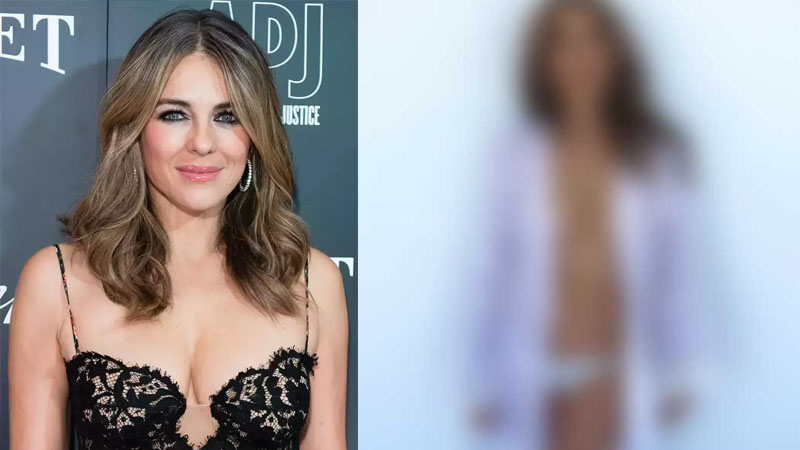 Elizabeth Hurley has been creating a lot of noise amid the pandemic. The Gossip Girl actress has left many in admiration with her sultry looks. The beauty is 56-year-old but clearly, she’s aging like a fine wine! She’s now created havoc with her latest topless picture and dares you to miss it! Scroll below for details.

For the unversed, Elizabeth rose for fame with her stint in Gossip Girl. She played the role of Diana Payne, Nate Archibald’s (Chace Crawford) love interest in the show. Her other prominent work includes Austin Powers: The International Man Of Mystery, Bedazzled, The Royals amongst others.

Last night, Elizabeth Hurley took to her Instagram and showcased her ‘staycation’ at her own house. The actress was topless and covered her upper half partially with a sheer kimono. She paired it up with a striped bikini bottom.

For makeup, Elizabeth Hurley opted for tons of mascara, eyes filled with kohl and glossy lips. “Having my own staycation… in my own home,” she captioned the post.

Check it out below:

This isn’t the first time that the Gossip Girl beauty has done something like this. On numerous occasions previously, Elizabeth had left our heart racing. But the most favorite amongst it all was when the actress posed topless in the snow.

It was back in January when Elizabeth Hurley flaunted her toned physique – basically, her abs and her cleavage in a senso*us post. She wore nothing but a furry coat hiding her chest partially and matched it up with white bikini bottoms.

Princess Diana wanted to do THIS minutes before her death

Kim Kardashian Has Left Us Drooling But We Can’t Decide If It’s The Taco Or Her Hourglass Figure!

Boris Johnson is set to lift Covid-19 limit on weddings