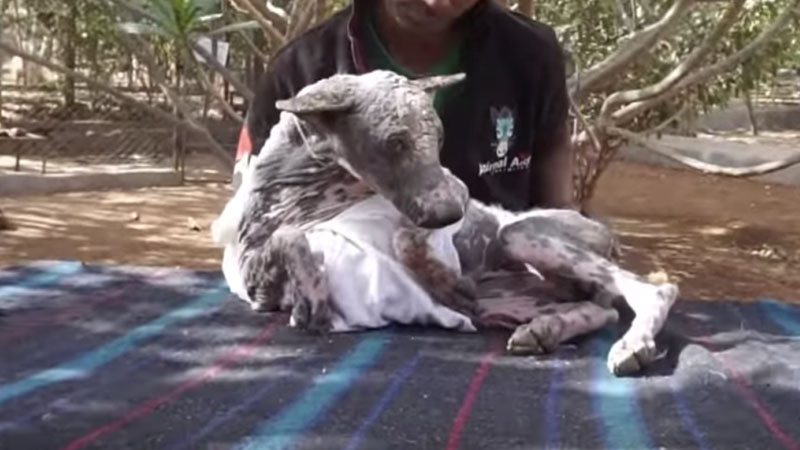 A stray dog whose body looked like cracked stone was found in front of a building in desperate need of help. Because of the advanced mange covering her body in thick crusts and scabs she was in too much pain to be touched.

According to the veterinarians, when mange becomes this severe it’s called ‘crusting’ which is immensely painful. She was found in front of the building with no fur left and no protection from the elements.

She was rescued by the animal-loving heroes from Animal Aid Unlimited who named the scared dog Shylo and brought her to the rescue center. Back at the hospital, the dog was examined for wounds or infections, and they applied medicated lotion to help soften the scabs. Her mange treatment was just beginning.

She was given her first bath after ages during which they gently removed all the scabs and crusts off her skin. After that they started giving her a diet that is rich in nutrients, something her body was sorely lacking.

Shylo cried because of severe pain through her baths at first. She’s terrified because she doesn’t understand what is going on, but her caregiver talked to her and tried to calm her down.

However, her new friends also worked on winning her trust which is of course a slow process but no one gave up on her. As the video says, “she has never known a gentle touch.”

It takes time to heal her body and her soul, but it is all worth it. But wait until you see Shylo today. You won’t believe it’s the same dog!

You Might Want To Brace Yourself For Kim Kardashian’s Latest Photoshop Fail On Instagram—It’s Insane!

Man killed his wife and dog while hallucinating they were ‘demons’