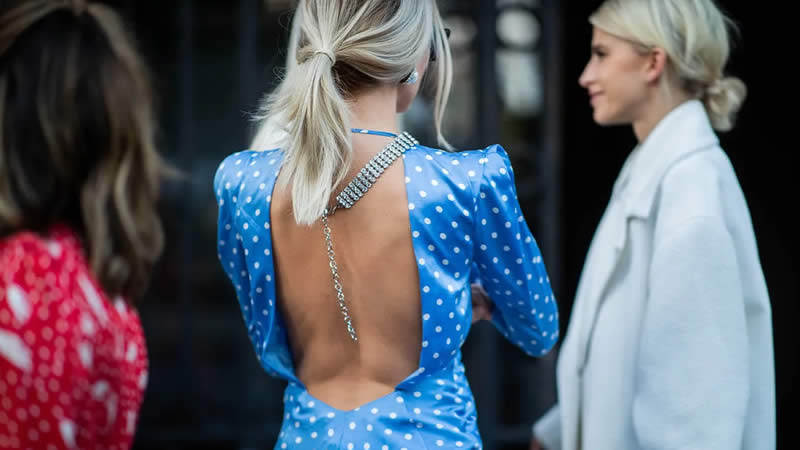 The post-pandemic summer dress is a key piece for 2021, but many brands haven’t factored in that consumers with fuller busts want to wear bras. A business opportunity missed?

A tweet from Priyanka Mattoo, a journalist and author based in Los Angeles, struck a chord with tens of thousands of people. “Does anyone on the entire internet want to suggest a summer dress for ppl who wear bras?” she wrote on 11 May on Twitter, her comment rapidly garnering 50,000 likes and over 2,000 retweets. The message was simple: there are lots of consumers out there who want to wear on-trend summer fashion while also feeling supported by a bra.

Mattoo had just started her day. “I sat down with a cup of coffee and opened my personal email to all these marketing emails that were like ‘fresh summer dresses’… but they were all beautiful strappy dresses on flat-chested women,” she says, speaking from her LA home. “I was just annoyed… I’m ready and willing to spend money (and now, I know, so are many others). Where are the dresses for me?”

Sales of dresses slumped during the pandemic, with new arrivals down 36 per cent from March 2020 to this March, according to retail intelligence platform Edited. But summer dresses are back as a key pillar of this season’s assortments. As events begin to resume in many countries, brands are leaning into glamour again. Trending styles include cutouts, bodysuits and cami dresses, all of which can be challenging for those people who wear bras.

During the pandemic, many consumers chose to ditch traditional bras, rejecting the sense of confinement that they represented. But that has still left very many who have continued to buy bras, although seeking a compromise between comfort and support.

Mattoo’s tweet reminds fashion designers that many people really do want the support that a bra offers. “It’s so funny when you tweet something like that, and you think you’re the only person having the thought. And then you realise there’s a real gap in the market here,” she says. “I’ve had children, and I nursed. Gravity and time have taken their toll, and I need full support.”

While many brands (from Erdem to Versace) are extending their sizing ranges to be more inclusive, the importance of bras is often overlooked by fashion designers, she argues. “I think that if a designer is going to make a dress that only has one strap, I want to see a person with very large breasts in that dress without a bra because that’s the reality of the garment.”

It’s possible to find dresses that cover a bra, says film producer Sophie Strauss, who responded to Mattoo’s tweet with a helpful list of flowing dresses that conceal bra straps from brands like Faithfull and Anthropologie. The real challenge is finding garments that can offer bust support without one, she says. “I think the issue with a lot of size inclusivity is that things have sort of just scaled up, but they haven’t really considered body proportion. I would love for more designers to sort of think about that as well. There’s no understanding that for some people, the waist needs to be smaller because that’s actually where the support comes from, having something that’s relatively tight and then having more room in the bust area.”

What styles can work?

Premium brand Reformation is rated in Mattoo’s Twitter thread as a good option for those who want support for their busts. The brand released an “I’m Up Here” capsule in 2014 for people with fuller busts, folded into its main line with the launch of extended sizing in 2018. Among the most popular styles for fuller busts are the Noreen dress and Meadow dress.

Shirred dresses, such as the Reformation styles, can provide support without a bra, as they offer flexibility, Terhart says. “Because of the shirring, they can expand, but they definitely give a little bit more compression without it being necessarily that balconette style top, which always rides up.” However, reflecting a gap across many e-commerce sites, this possibility isn’t shown to consumers – none of the models are wearing a bra or have a fuller bust.

Reformation relies on customer feedback to plan its assortment and considers proportion as it extends sizing, a spokesperson for the brand says. “People assume when making bigger sizes it is a matter of just grading up. In fact, you must ensure that your pattern considers style, shape and fit as you grade up, and also use a fit model to ensure proper fit.”

Terhart has worked with premium San Francisco clothing brand Nettles Studios to produce a summer dress that takes into account wearers with a fuller bust. It’s a tie-sleeve style, but with a thicker strap and higher underarm cut, so it’s easy to wear a bra underneath. “I specifically worked with them to design something that could cover a bra, not be worn with a bra or be worn with a bra with very little support and have it still look good and cover everything that needs to be covered,” she says.

Fashion can learn from lingerie

Consumers who want support designed into the garment itself are still under-served, it seems. “I’m trying to find dresses that I can wear without a bra that gives me some semblance of structure or support, even if it’s not the same life and separation as wearing an underwire bra,” says Terhart. “I’m very busty, which means that most built-in bras in a garment aren’t really going to do the same thing as underwire.”

It’s certainly possible to feel supported in a garment without a bra with the right fit technology, says Silvia Campello, chief executive officer of luxury lingerie brand Cosabella, which has created innovative in-garment bust support with mesh inserts and carefully concealed under-bust bands. Cosabella first developed its non-wired best-selling Sweetie bralette almost 10 years ago, which focuses on different body compositions in its sizing. The company estimates one is sold every three minutes globally.

“We took that same engineering and put it into garments so that outerwear can be just as supportive as the intimate apparel that you’re using underneath. We almost built in the bra, so you get the same support you would from wearing a bra and a camisole, but in one item,” Campello says. They are offered in a range of sizes and a range of body compositions, from curvy (larger cups, low back size) to extended (larger cups and back size) or beauty (larger back size, smaller cups).

Meanwhile, lingerie players are finding new ways to innovate so that bras can be subtle and fit better under clothes. Luxury lingerie brand Agent Provocateur launched its Anytime range in February in increased sizing ranges and neutral shades to fit consumers’ lifestyles, says creative director Sarah Shotton. “I believe it’s about freedom of choice… We are constantly working on the fit and functionality of our bras,” she says.

Mattoo did find a dress in the end after someone in her Twitter thread recommended premium British brand Toast. “I ordered a bunch of stuff from there. I thought it was beautiful. Well-made, exactly what I needed,” she says.

The simple step of representing a wider range of body types in marketing and advertising offers hope for the future. As Terhart puts it, “I think that the more we normalise seeing different body types with or without bras, the better.”

COVID-19: William Shakespeare is dead, first man in world to get approved vaccine