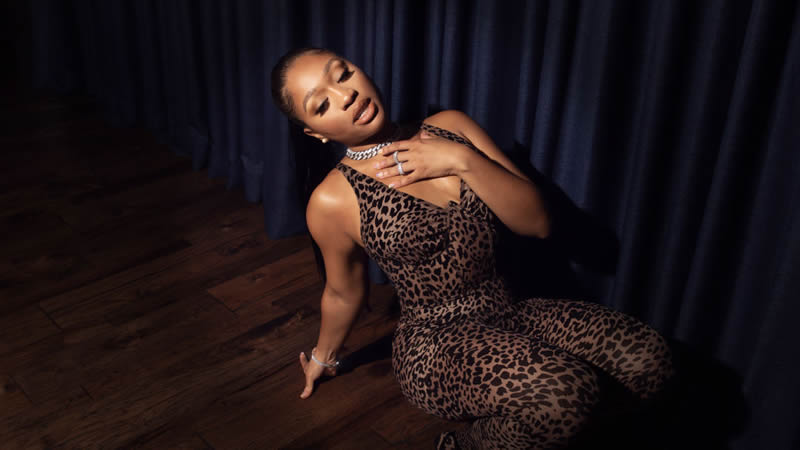 Houston-based designer Tacharra Perry took some time off after her clothing brand’s early rise to success. Now she’s back and channeling Beyoncé.

N 2014, HOUSTON-BASED DESIGNER TACHARRA PERRY TRANSFORMED HER KNACK FOR SEWING into her fashion label, CHAR. Now, nearly six years later, her trendsetting creations have landed her a spot in New York Fashion Week, nods from Beyoncé’s BeyGOOD foundation and Flo Milli, and a body positive commercial that premiered during this year’s Grammy Awards.

This laundry list of success stems from Perry’s ambition, creativity, and beautiful clothes, but these accolades didn’t just come overnight. We caught up with the rising innovator on the two-year break she took from CHAR, her collaborative commercial with Facebook, and how she’s manifesting Beyoncé all 2021.

CHAR amassed a great amount of success early on. Many would continue building on that wave, but you took some time off. How important was it for you take a break from the brand?

For me, it was very important because when I did have my first NYFW show, everything came so fast. I didn’t know what I was doing, and I didn’t understand the politics and the business behind fashion. Also, I did miss out on opportunities, such as sales, because Jordyn Woods wore my garment after the show, and that was my first experience with consumer demand. After fashion week, I continued with CHAR, but I took a simpler approach and just did the basics. But I realized that was not what I wanted for my brand. I always knew that I wanted CHAR to be a luxury brand, so I pursued school full time. After I graduated in 2018, I went to New York and started working for Calvin Klein on their design and production team and that was a very important part of my life. I was able to pick up on things behind the scenes, production from start to finish, creating a sketch, and focusing on smaller details. Calvin Klein definitely played a big role in CHAR today.

What are ways that you rebranded Char Workroom?

Just focusing on smaller details, for example, packaging. I released a hoodie last year and all of them have CHAR engraved on the tip. Also, mastering photography, knowing what I wanted to put out there and making sure that people always know that this is a Black-owned brand. I’ve also expanded the size chart, so now we go up to 3X. I didn’t have these sizes in my original launch, and my customers really do appreciate that it’s present now.

Your clothes were featured in a Facebook commercial during the Grammy’s. How did this come about?

Again, I was checking my email and I saw something that said “WK ” (for advertising agency Wieden + Kennedy). Then I saw, “We’re interested in your shorts for this project we’re working on.” I further looked into the links and the signature, and it said that the company worked with big brands like Nike, Pepsi, Coke, and so much more. I emailed my publicist everything and told her let’s try and schedule a call with them. In the call, they slightly told us that this would be a commercial, but they wouldn’t say for who and what. Everything happened so fast, but the craziest thing is the fact that the director of that shoot worked with Beyoncé. It’s like … wow, it’s aligning! We’re manifesting Beyoncé this year with CHAR.

What’s one thing you’d like returning and new customers to take away from CHAR?

The brand’s consistency, the clothing’s quality and understanding that we’re remaining exclusive. Overall, I want everyone to have a positive experience with us and feel confident when they’re wearing CHAR.

Number of followers on Meghan and Harry’s ‘Sussex Royal’ drops to 10.2 million