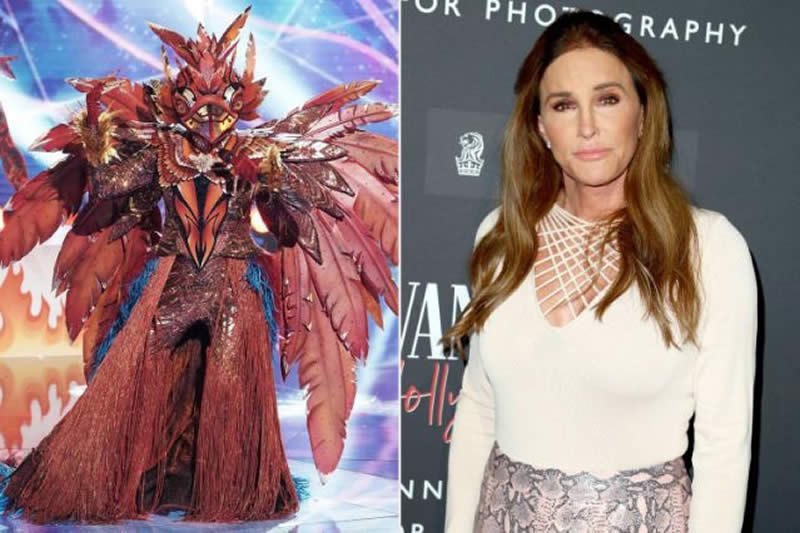 Phoenix rose from the ashes when Group B made its Masked Singer debut Wednesday. But the mythological bird’s luck ran out during the St. Patrick’s Day episode when she got voted out and had to take off the fiery costume.

Even before Caitlyn Jenner stepped out from under the Phoenix outfit, judges Jenny McCarthy and Ken Jeong guessed the Olympic gold medalist, 71.

Never miss a story — sign up for PEOPLE’s free weekly newsletter to get the biggest news of the week delivered to your inbox every Friday.

“I thought the clues were way too good. I could have figured that one out,” Jenner tells PEOPLE. “I’m standing there going, ‘Oh, they’re going to figure this one out.’ The clues narrowed it down to such a small community that it would be much easier for them to pick who it was. I was surprised at anybody who didn’t figure it out.”

The Secrets of My Life author gave a performance of Kesha’s “TiK ToK” that brought the panelists to their feet, even though it didn’t get her to advance in the singing competition. “I’m not a singer or dancer — I grew up running fast, jumping high and throwing things — but I thought it would be fun and certainly a real challenge,” Jenner says of why she wanted to do the show.

Below, the reality star shares what her famous kids thought of her going on The Masked Singer, why she picked the Phoenix costume and how she feels about the upcoming end of Keeping Up with the Kardashians.

We’ve seen you on reality TV before, but why did you want to go on The Masked Singer?
That is an excellent question. First of all, for the last year, all business just came down to a screeching halt. They actually had asked before if I would do it and I said, “No, it’s really not my element of what I do.” Then, they asked again and I thought, “Well, they’re pretty persistent.” It was a time where I wanted a challenge and to do something out of my element, which this certainly is. Hey, why not? Give it a shot, have a little fun with it. I love a big challenge. Any celebrity out there that gets asked to do it, I would suggest do it. You’re going to learn a lot about yourself.

Want to get the biggest stories from PEOPLE every weekday? Subscribe to our new podcast, PEOPLE Every Day, to get the essential celebrity, entertainment and human interest news stories Monday through Friday.

You talked in your clue package about feeling like you’ve been wearing a mask your whole life. What did you mean by that?
When anybody suffers from gender dysphoria, you do kind of wear a mask in life about who you are, especially me growing up. I’m older — I grew up in the ’50s, ’60s, mostly in the ’60s and even through the ’70s where you just didn’t talk about this. You just put your face on, and went out into the world, and did the best you possibly could. It isn’t until over the last 20 years that, really, this issue has come forward. Today, because of the internet and television and society, they’re much more accepting of the differences people have. You can eventually feel more comfortable with yourself and be more honest with yourself and everybody else around you, so you can kind of take that mask off.

RELATED VIDEO: Caitlyn Jenner Says Ex Kris Jenner Would Be ‘Phenomenal’ on RHOBH: ‘She Would Do Really Well’

You also mentioned appearing on magazine covers in the clue package, and the Vanity Fair issue you covered in 2015 was groundbreaking. Do you feel like there’s been more acceptance of the trans community since then?
It’s sometimes very frustrating. The trans community is very small, and trans issues do not have borders. These are issues that every country around the world deals with, and that’s trans issues. When I came in, I said, “Okay, I am really going to make a difference here and use my platform” — which is a very different platform than 99.9 percent of the trans community — “and work really hard politically,” trying to make changes in the world. It became actually very difficult to make change, to change people’s mind. As time went on, I think the best thing I could do is to have a foundation and make it a scholarship program for trans youth.

Today, younger people identify a lot quicker because of the internet and the information that’s out there. But education is by far the most important thing. I want to be able to change that next generation that’s coming along. I want trans doctors, trans lawyers. I want them to be educated out into the world, having a job and really being part of society. The most important thing I feel like that I can do is continue to be visible. Continue to show people who have to deal with a subject like this, that life isn’t over.

Doing The Masked Singer is part of that. Kids of all ages watch the show and you can really inspire them and start a conversation within families.
I’m not going to hide and say, “Oh my God. I can’t do that.” No, I’m going to be out there. I want to show young people that you can go through this. You can live your life authentically and still have a life out there. Family by far is the most important thing when you go through something like this. When you do it later in life, at a later stage in life, that becomes a big issue. For me, I sat down with each one of my kids individually, I told them what’s going on. I was one of the lucky ones. I had tremendous support.

Catch People (the TV show!) Monday through Friday. Check your local listings for exact times or stream the show every day at 7 p.m. ET/ 4 p.m. PT at People.com and PeopleTV.com.

That’s the experience anyone going through what you did would want.
All my kids were very positive. [They said,] “We want you to be happy. We want you to live your life. We’re accepting.” They certainly have been. My family is by far my biggest support group that I have, and that’s the most important thing. Unfortunately, that doesn’t happen in a lot of families. They go through something like this and the family literally abandons them. I was fortunate, my family did not. I still see them, still have a relationship. In some cases, I have a better relationship with them now. Because I’m not hiding behind the mask any longer. I can be honest, I can be open. I can just be myself. There’s no more sneaking around. You know how difficult it was to live my life before?

I can’t even imagine.
It was so difficult to live my life before. Today, I just get up and be myself all day.

We’ve seen a lot of your family on Keeping Up with the Kardashians, and the final season kicks off Thursday. Do you have any favorite memories from the series?
My favorite memory from the show is my relationship with my children. That show brought the entire family closer together. We had some of the greatest conversations. Because sometimes when you’re shooting the show, you’re forced into talking about certain issues. Where if the show wasn’t there, you would kind of put it off, and say, “Eh, that’s a tough subject. I’ll put it off till later,” but now you can’t.

Is it bittersweet to see the show end?
It’s kind of sad to see it come to an end, I have to admit. All my children took the exposure from that show and were able to build great lives for themselves. I always feel like being a celebrity and being out there in the public is not easy. It’s kind of a tough business. You’re open to criticism. But if you look at it as a job and really use that celebrity status to start a business, to do something else outside of the celebrity world, it can be very good. Fortunately, all my children, not just the ones on the Kardashian side of their family, but also, I’ve got 10 kids total. (Caitlyn has sons Brandon Jenner, 39, Brody Jenner, 37, and Burt Jenner, 42, and daughters Cassandra Marino, 40, Kendall Jenner, 25, and Kylie Jenner, 23, from previous marriages. She also helped raise ex-wife Kris Jenner’s four kids with the late Robert Kardashian Sr.: Kourtney, 41, Kim, 40, Khloé, 36, and Rob, 34.)

All mine on the Jenner side really have built great lives for themselves. As a parent, that’s by far the most important thing. Is it sad to see it end? Somewhat. But my kids are doing okay. They’re all great kids, and I’m proud of every one of them.

When Are Jokes Not Funny? ‘The Office’ Gets Pummeled as Problematic – by an Actress on the Show