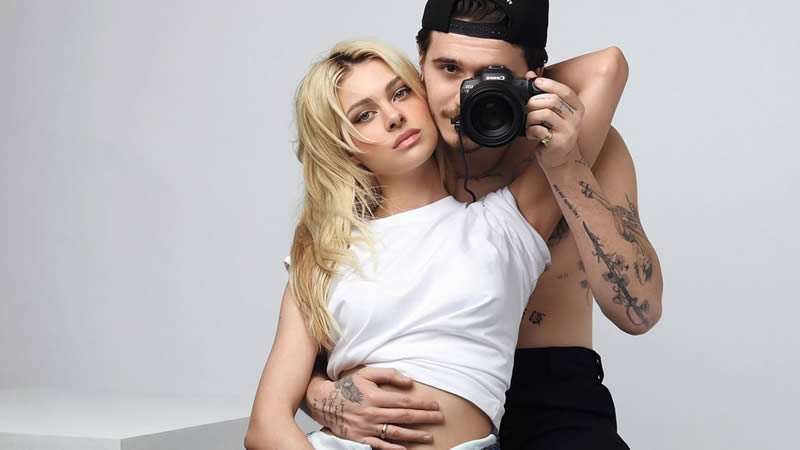 On Tuesday, the actress revealed on Instagram that Brooklyn, 22, was the photographer behind her editorial spread featured in the April issue of Vogue Germany.

Peltz, 26, posted a variety of photos taken for the issue in which she is seen modeling pieces by Brooklyn’s famous mom, Victoria Beckham’s Spring/Summer 2021 collection.

“Shot by my talented @brooklynbeckham for @voguegermany,” Peltz wrote in the caption.

Peltz’s soon-to-be family shared their support on social media, commenting on the photos and reposting the shots to their own accounts.

Brooklyn also shared the snaps on his Instagram, writing, “Shooting my beautiful fiancé for @voguegermany in @victoriabeckham spring summer 2021 collection ❤️,” to which Peltz replied, “MY LOVE 😍.”

Victoria, 46, posted the photos to her feed, on which Peltz commented, “i loved doing this so much 🥺💖” and “love you so much!! your dresses are A DREAM.”

Brooklyn’s dad, David Beckham, also praised the couple on his Instagram Stories, sharing that he was “so proud” of his son and that Peltz was “looking amazing.”

Earlier this week, Brooklyn revealed on his Instagram Story that Peltz got a new tattoo of his name written in cursive on her upper back.

Peltz also reposted the photo to her own Instagram Story, showing off the black body ink.

While this is seemingly Peltz’s first tattoo dedicated to her fiancé, Brooklyn has been inked several times in honor of the actress.

In January, Peltz revealed that Brooklyn got a new tattoo of her late grandmother’s name, Gina, for the actress’s 26th birthday.

Gwen Stefani Just Dropped This MAJOR Bombshell About Her Family—We’re Devastated For Her!