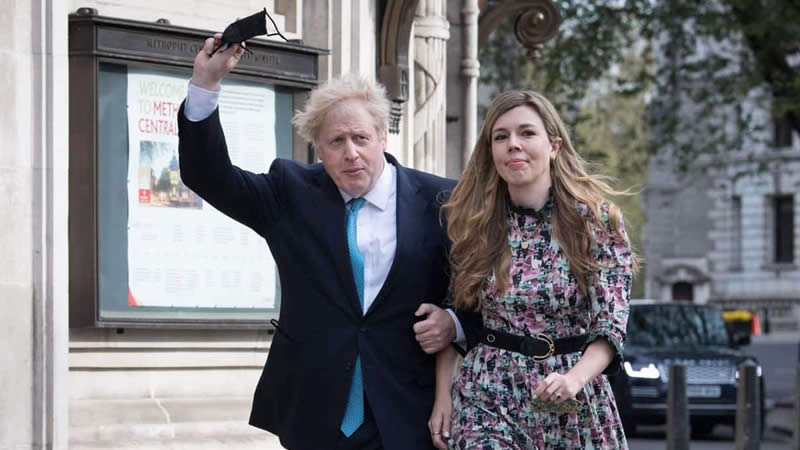 In April 2020, The British couple announced that they have been engaged before the birth of the son Wilfred.

There was no news about the event in advance and the media said that the guests were also invited at the last moment to the Roman Catholic cathedral in central London. Even his senior officers were also uninformed about his marriage.

“The Prime Minister and Ms. Symonds were married yesterday afternoon in a small ceremony at Westminster Cathedral,” Johnson’s office said Sunday. “The couple will celebrate their wedding with family and friends next summer.”

As per Covid-19 restrictions, weddings in England are limited to 30 people only.

Since 2019 when Johnson became the Prime Minister, Johnson, 56, and Symonds, 33, have been living together in Downing Street.

On Saturday, the cathedral was suddenly locked down at 1:30 p.m. and Symonds arrived 30 minutes later in a limo, in a long white dress with no veil, media reports said.

When the couple was expecting a child in April 2020, they announced that they are engaged.
In May, British tabloid The Sun reported that wedding invitations had been sent to friends and family for July 2022.

Johnson, once dubbed “Bonking Boris” by Britain’s tabloid media, has a complicated private life.
Earlier, he was fired from the Conservative Party’s policy team while in opposition for lying about an extramarital affair. He has been divorced twice and refuses to expose the number of children has had.
Johnson’s last marriage was to Marina Wheeler, a lawyer. They had four children together and announced in September 2018 that they had separated.

Kamala Harris Searches for ‘Root Causes’ of the Border Surge, While John Kennedy Has the Real Solution